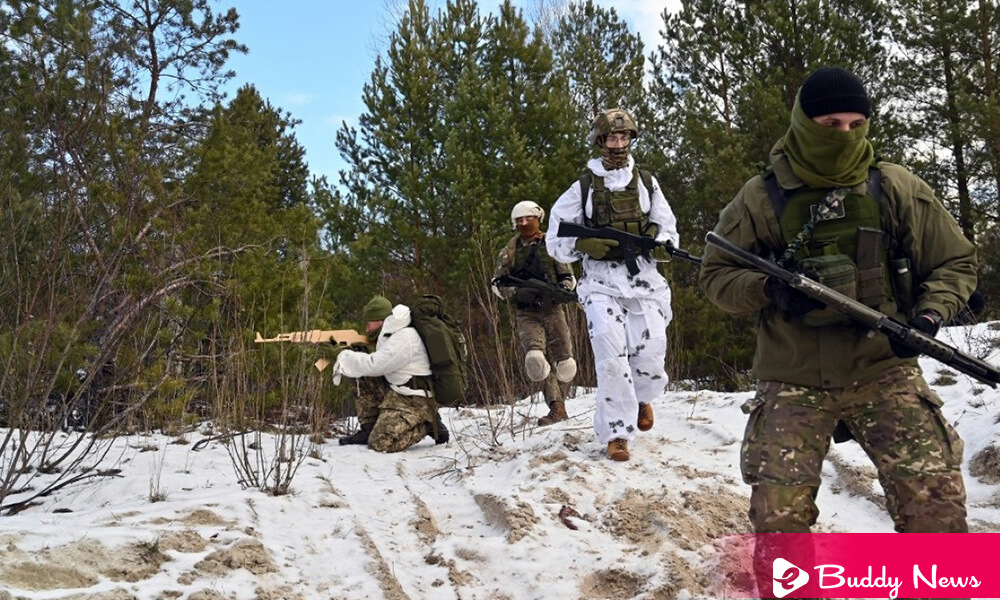 The immersion of Russia and Ukraine in a crisis threatens to spark a new military conflict over accusations that Vladimir Putin’s government is preparing an invasion of its pro-Western neighbor.

The current tensions have historical roots. Here is a summary.

Common Roots Of Russia And Ukraine

The two countries share a thousand-year history, dating back to Kievan Rus. This principality existed from the 9th to the 13th centuries.

This entity was straddling contemporary Russia, Ukraine, and Belarus. Moscow feels this area as its cradle.

In a text published in July, Putin stated that Russians and Ukrainians are a single nation that belongs to the same historic and spiritual space.

In his Annual Press Conference, he claimed that Lenin had created Ukraine in the early years of the Soviet Union. Thus it was a way of denying the specificities of that nation, which he had presented as ‘artificial.’

Both Have Two Languages

Moscow regularly accuses the Kyiv authorities of wanting to “de-Russify” their country by favoring the Ukrainian language.

Ukraine retorts that it is only correcting the forced Russification under the Russian Empire and the Soviet Union.

Ukrainian and Russian belong to the same East Slavic language family. Thus They have many similarities and differences.

Ukrainian dominates in ‘Western and Central Ukraine’; and Russian in eastern and southern Ukraine.

After the Ukraine independence after the fall of the USSR in 1991, Ukrainian became the only state language.

A recent survey reveals that, although Ukrainians are mostly bilingual. 78% of the population and Russian by 18% consider Ukrainian as the ‘mother tongue.’

However, the Russian language has turned down in response to Moscow’s annexation of Crimea. Further, a ‘Law Passed in 2019’ requires the Ukrainization of various sectors, including trade and services.

Among the main historical facts for the dispute between Russia and Ukraine is the ‘Holodomor.’ It is a great famine that killed several million people in 1932 and 1933 in Ukraine.

Both Kyiv and historians describe this tragedy as a “genocide.” Stalin orchestrated it against the Ukrainian people, who resisted the collectivization of the land.

However, Moscow and other historians reject that particular characterization, placing the events in the broader ‘famines’ that claimed many victims in Central Asia and Russia.

The said controversy is improbable to fade away because of the Kremlin, which adopts a glorified view of Russian history. The issue tries to downplay Stalinist crimes.

The Divisions Of The Donbas

The Donbas, a region in eastern Ukraine, is the epicenter of the conflict that has pitted Kyiv’s forces against pro-Russian separatists who got support from Moscow since 2014. This mining and industrial basin are economically vital to Ukraine.

It is also at the center of a cultural battle between Kyiv and Moscow. , Along with much eastern Ukraine, it argues that the region of Russian-speakers population requires protection from Ukrainian nationalism.

However, the Russophilia of the region is due, at least partly to the forced Russification and re-population of the region. After World War II, hundreds of thousands of Russian workers arrived there.

That entry, along with the victims of the war and the Holodomor, changed the ethnic and cultural balance.

The Situation In Crimea

Even more complex is the situation in Crimea, annexed by Moscow in 2014 after a pro-Western revolution in Ukraine.

In Russia, the peninsula is considered a crucial part of the country.

Russians’ Generation vacationed there under the USSR, helping to build up a strong attachment to the region.

Being part of the Russian Empire from the 18th century, Crimea was under the Soviet Union. It got integrated into Russia until it got annexed to Soviet Ukraine in 1954 through a decree of ‘Nikita Khrushchev.’

The international community did not recognize his annexation by Moscow, and Ukraine demanded his return.

US officials said Russia had deployed 110,000 troops along the border with Ukraine. Still, intelligence assessments have not determined whether the Russian president plans to invade.

They noted that Russia is on track to amass a force of some 150,000 troops for a full-scale invasion in mid-February.

Intelligence officials added that it could take the capital Kyiv in 48 hours, killing up to 50,000 civilians, 25,000 Ukrainian soldiers, and 10,000 Russian soldiers. That unleashed a wave of refugees, up to five million people.

In addition to the potential human cost, Ukraine worries about further damage to its battered economy.

Russia is pursuing affirmations from NATO that Ukraine will not join the Alliance. And they want the North Atlantic bloc to withdraw its forces from Eastern European member states.

Moscow refused to accept that it intended to invade Ukraine. Further, a Kyiv presidential adviser said that the chances of a diplomatic solution were substantially greater than the menace of further escalation.

Ukrainian Foreign Minister Dmytro Kuleba sought to defuse tensions and posted on Twitter not to believe doomsday predictions. He added that different capitals had different scenarios, but Ukraine was ready for development.

French President Emmanuel Macron, who holds the rotating presidency of the European Union (EU), visited Moscow on Monday and went to Kyiv on Tuesday to lower tensions. 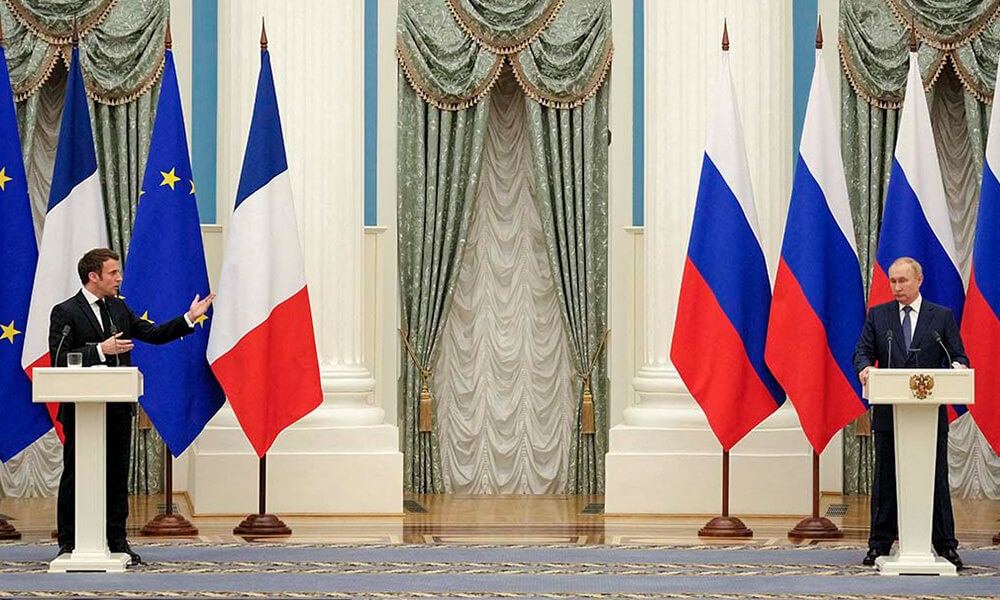 Macron proposed to Putin to build concrete security guarantees for all the states involved in the Ukrainian crisis.

While the Russian president stressed his disagreements with NATO, the French president outlined his objectives about short-term military stability. A discussion between Russia and the United States, and the Europeans continues to find a way out for all safety measures.

However, at the same time, he reminded the Russian president that the ‘Baltic’ countries and bordering ‘European’ countries had the same suspicions of security as those that prevail in Russia. French president advocated that it is necessary to rebuild these concrete solutions together since we live on both sides of common borders.

Macron promised to strengthen contacts with all his partners to reach new solutions. He added that they had outlined some pathways in our meeting.

He concluded they would speak again in a few days. And he is sure that they will reach a result. It is not easy, but he is sure of it.

Putin estimated that some proposals from his French counterpart to de-escalate tensions between Russia and the West over Ukraine could bring progress. He hopped on his part that he would do everything possible to reach compromises.

Putin said that some of his ideas and proposals could lay the foundation for future progress. He referred to Macron at a joint news conference after the meeting.

He added that we would do everything possible to find compromises that satisfy everyone for our part. He assures that neither wants a war between Russia and NATO that would have no winner.

However, the Russian president again accused NATO of expanding to threaten Russia in the last thirty years.

He said they try to calm us down with claims that NATO is a peaceful and defensive organization. He cites Iraq, Libya, Belgrade as counterexamples.

He also denounced the military aid again that Western countries provide to Ukraine.

On the other hand, Putin criticized the refusal by the West to accept his main demands.

These include the end of the enlargement policy of NATO. The policy showed their commitment not to deploy weapons near Russian borders. Further, they also speak about the withdrawal of military troops from the Alliance until the 1997 borders. To be clear, it happened before the organization welcomed former members of the Soviet bloc into its sine.