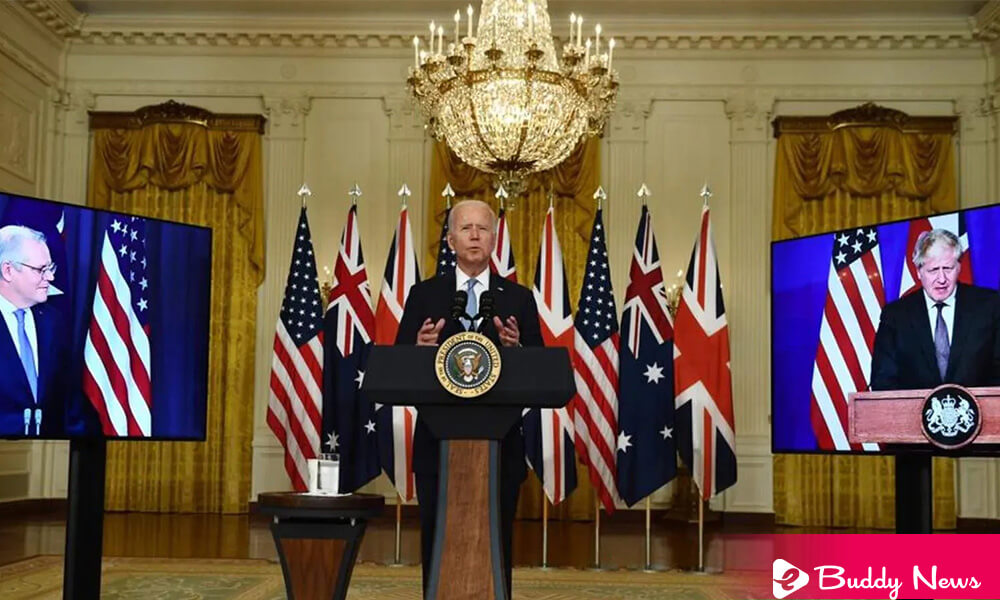 The president of the United States, Joe Biden, announced a strategic defense agreement between the US, Australia and the UK in the Indo-Pacific region, seeking to curb China’s growing influence. The plan includes support for Australian authorities to develop nuclear-powered submarines.

A new trilateral security association by the US, UK, And Australia announced that it emerges in the Indo-Pacific defense in a likely attempt to counter China’s regional influence, mainly in the disputed South China Sea.

The unprecedented alliance, known as AUKUS, is led by the United States, which will join forces with Australia and the United Kingdom.

According to the White House, the defense agreement will allow the three countries to share artificial intelligence, cybernetics, underwater systems, and long-range attack capabilities.

US President Joe Biden, UK Prime Minister Boris Johnson, and Australia Prime Minister Scott Morrison appeared to discuss their plan about Indo-Pacific defense and announced the news on a virtual platform. They announced that they would immediately focus their concentration on developing nuclear-powered submarines for Australia.

Biden said that they recognized the imperative to ensure long-term peace and stability in the Indo-Pacific. They need to address both the current strategic environment in the region and wanted to detail the way it can evolve. He added that the new alliance reflects a broader trend of important European partners playing a vital role in that region.

For his part, Johnson noted that the pact would allow the three Anglo-Saxon democracies to strengthen their ties and sharpen. Their focus is on an increasingly tense part of the world.

British prime minister said they would have a further opportunity to strengthen the UK’s place at the forefront of science and technology, encouraging their national expertise. Perhaps most importantly, the UK, Australia, and the US will come together even more.

He emphasized that Morrison assured that the three nations had always seen through a similar lens. To face these new challenges, to help provide the security and stability that our region needs to a new level as the world becomes more complex.

Central to the agreement is the support Australia will receive from its partners to develop nuclear-powered submarines. According to this announcement, the United States and the United Kingdom countries agreed to provide the technology and capacity for the mission.

However, the US president stressed that the submarines that Australia plans to obtain will not have “nuclear weapons” but will be “conventionally armed” but “powered by nuclear reactors.”

Biden said that they all recognize the imperative of ensuring long-term peace and stability in the Indo-Pacific. It is a proven technology, and it is safe.

Morrison supported with an appreciation, who said that they would continue to comply with our nuclear non-proliferation obligations.

A Defense Strategy With An Eye On China

The new security strategy of China is likely to be seen as a stimulating move, which has regularly lashed out at the Biden Administration. It sought to refocus US foreign policy on the Pacific early in its presidency.

None of the three leaders mentioned China, and senior officials in the Biden Administration said they did not intend to counter Beijing.

But several experts point out that Washington and its allies are looking for ways to roll back China’s growing power and influence. Particularly they pointed out its military build-up, pressure on Taiwan, and deployments in the disputed South China Sea.

The former director of US national intelligence, James Clapper, said Australia made a bold move given its economic dependence on China. Also, he added that clearly, the Chinese would see this as a provocation.

Submarine warfare capabilities have been Beijing’s “Achilles heel,” said Matt Pottinger. He served as the Trump administration’s deputy national security adviser. A fleet of nuclear-powered submarines would allow Australia to conduct more extended patrols. That would give the new alliance a more substantial presence in the region.

Republican Senator Ben Sasse considered that the agreement sends a clear message of strength to President Xi. He stressed that he will always applaud the concrete steps to counter Beijing, one of them.

Although the governments involved deny an attempt to stop China, they reached this strategic defense pact when the relationship between Washington and Beijing has deteriorated. Even Vice President Kamala Harris recently called on Vietnam to join the US in defying “harassment” from China during her visit to Hanoi last August.

The Chinese embassy in Washington responded that countries should not build exclusion blocs that target or harm the interests of third parties. They should get rid of their Cold War mentality and ideological prejudices mainly.

The Chinese Government has shown its disappointment with the repeated complaints from the White House. They were irritated with complaints like human rights violations in Xianjing province, the repression of democracy activists in Hong Kong. And also the data breaches that originate in China and Beijing’s handling of the Covid-19 pandemic. Furthermore, the Xi Jinping Administration refutes what Washington calls “coercive and unfair” business practices.

The announcement also comes after President Joe Biden called his Chinese counterpart on September 10 to agree on areas of common interest, such as the pandemic and climate change. Although both were willing to work on these issues, Xi Jinping blamed the US president for the policy that has left “serious difficulties” in relations between the two countries.

The new Indo-Pacific alliance would add fuel to long-standing tensions between Beijing and Washington.