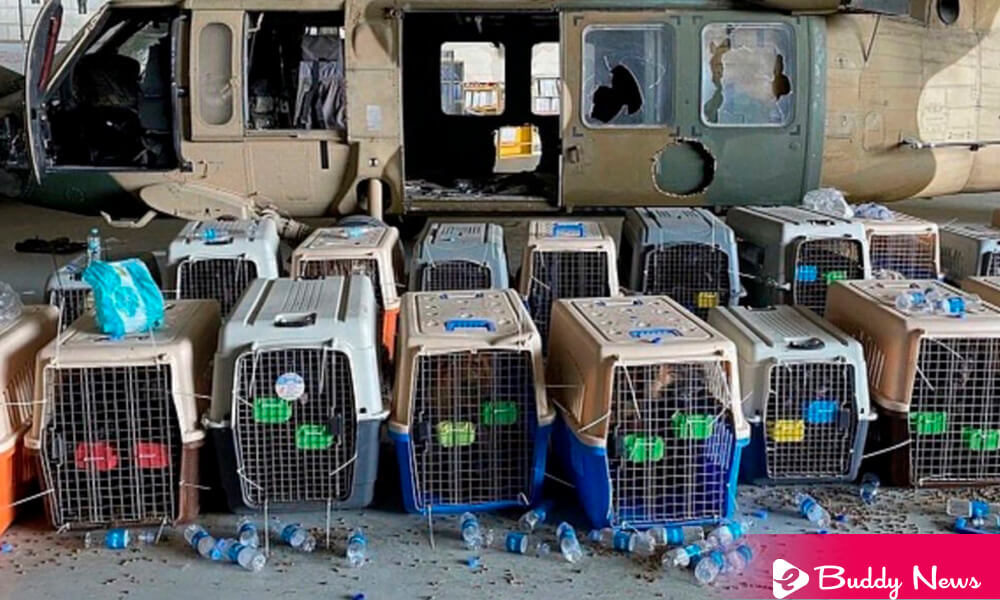 US Troops Abandoned Dogs At Kabul Airport But They Denies

According to the non-profit organization, used dozens of cages with dogs were abandoned by US troops at the Kabul airport after the withdrawal of troops from Afghanistan in the face of the Taliban victory. The Pentagon denied the allegations and claimed that animals do not belong to the forces of the United States.

Veteran Sheepdogs of America, an organization that focuses on uniting war veterans, reported that it continues to help evacuate dozens of hired dogs which performed military duties alongside US forces from the country.

The official Twitter account of the non-profit organization published an image in which dozens of cages with the animals can be seen inside at the Kabul airport. They reported about abandoning that this represented only a part of the canines.

According to Joshua Hosler, the organization’s president, the NGO took responsibility for rescuing 51 working dogs. A contractor and an Afghan refugee family are feeding the animals. “They are safe,” he reported as he seeks to raise money to get the dogs out of Afghanistan.

A post from the organization next to the photo is that whatever disaster you think Kabul is more than worse! The deadline imposed by the Taliban for the United States to evacuate its citizens and Afghans, another tweet was published. The account warned that they received orders that if the dogs were not on the plane when it took off, they had to leave them in the place. “We need a miracle!”

Based in the Afghan capital, another organization called Kabul Small Animal Rescue (Little Animal Rescue of Kabul), dedicated to rescuing animals left in Afghanistan. They seek to raise funds through GoFundMe to finance their mission. “We desperately need help evacuating staff and animals from Kabul,” begs her description.

The primary mission of the United States was the evacuation of US citizens, SIV [immigrants with special visas], and vulnerable Afghans. However, the US military is not leaving any dogs in cages to correct erroneous reports at Hamid Karzai International Airport. The statement detailed the reported military working dogs.

He added that despite an ongoing retrograde, complicated and dangerous mission, as much as possible, US forces did everything possible to help Kabul Small Animal Rescue.

People aroused the anger of personalities, including politicians, who targeted the United States government and its accelerated departure from the territory because of the images of the working dogs circulated on social networks.

Donald Trump Junior, the son of former US President Donald Trump, rebuked the Biden administration. He mentioned the Americans who remained in Afghanistan.

Donald Trump Junior tweeted that the Biden administration didn’t just abandon Americans in Afghanistan. And their US troops even abandoned the hard-working service dogs.

The last five US military transport planes to take off from Afghanistan left 200 Americans and thousands of desperate Afghans who could not get out. They are now dependent on the Taliban to allow their departure.

US Troops Abandoned Dogs At Kabul Airport But They Denies