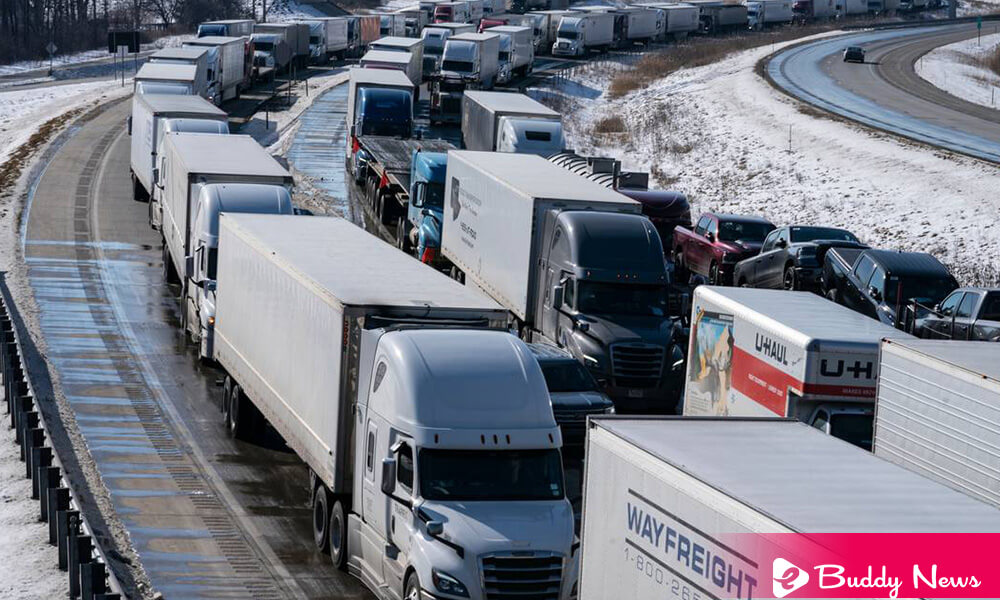 New blockade extending to roads leading into the US border contain forces several auto giant plants to shut down or cut production on both sides of the border. The dissent of Hundreds of truckers in Ottawa expressed protest against the ‘vaccination pass’ intensification. Meanwhile, authorities in Paris and Brussels have announced that they were barring similar caravans from entering their cities.

Protests against restrictions due to ‘Covid-19‘ in Canada tighten the screws of the automotive industry.

The so-called ‘Freedom Convoy’ extends beyond the streets of the Capital Ottawa, blocking traffic and disrupting commerce at the busiest border crossing in North America.

The demonstration began on January 28. Still, the demonstration has been expanding even more. The commotion made Jim Watson, the mayor of the Canadian capital, declare a ‘State of Emergency.’

Since last Monday, February 7, the Ambassador Bridge blockades connect Windsor, Ontario, with Detroit. That has interrupted the flow of auto parts and other products from one side of the border to the other. And in the last hours, the situation has become unsustainable for some companies.

The mayor of Windsor declared that the authorities are ready to withdraw, if necessary, the protesting truckers, stressing that the movement threatens to affect the economy of both countries.

They block in the neighboring province of Manitoba, the mainland crossing between Canada and the US.

Given the situation, companies such as Ford, Toyota, and General Motors announced pressure to close or reduce production in both countries.

Ford said its engine plant in Windsor reopened on February 10, after closing on Wednesday due to a lack of parts. However, the automaker explained that the company’s factory and assembly plant in Oakville, Ontario, near Toronto, is operating at reduced capacity.

The company said in a statement that this US blockade disruption to the Detroit-Windsor Bridge hurts customers, autoworkers, suppliers, communities, and businesses on both sides of the border leads to forces to shut down auto plants. They hope it will resolve this situation quickly because it could impact all automakers in the US and Canada.

From initial resistance to vaccination requirements, the truckers’ movement morphed into a broader demonstration against all restrictions related to Covid-19 and the liberal Trudeau government. It highlighted the constraints of the pandemic around the world. Additionally, the situation worsens as a ‘general malaise.’

Protesters have too raised their voices against a carbon tax. Meanwhile, authorities say traffic troubles have also affected roads leading to the airport.

While the protest in Canada grows in its neighboring country, the authorities said that they are preparing for the possibility of similar mobilizations of truck caravans.

The US Department of Homeland Security told state and local law enforcement agencies that it had received reports that truckers plan to block highways in major metropolitan cities, they also avoid vaccine mandates and other health measures.

White House spokeswoman Jen Psaki said that it is important for everyone in Canada and the United States to understand the impact of this lockdown. The potential impact, on workers, on the supply chain was where there was a lot of focus.

Paris And Brussels Restrict Entry To The “Freedom Convoy”

While Canadian authorities have called the blockade illegal and have asked protesters to return to work, the movement has sparked similar aftershocks in France, Australia, and New Zealand. Many are also expressing their frustration over two years of restrictions since the pandemic arose.

In France, the demonstration began on Wednesday, February 9, in Nice, and moved on to Paris in the country’s south. The Authorities expect Departures from more cities in the country. Also, the organizers announced they would take their discontent to Brussels. This city houses the main institutions of the European Union.

As a preventive measure, in the last hours, the Police of the French capital announced that they would deny the entry of protesters to the city from February 11 to 14, citing the risk of public disorder.

Similarly, the Regional Government of the Belgian capital announced that it prohibited the “Freedom Convoy” entry into the city.

Also, ‘the Region and the City of Brussels will administer rules prohibiting demonstrations with trucks on their territory. The statement said that the Federal Police would control motorized vehicles on the main roads to Brussels that come to demonstrate in Belgium. They also added that the authorities still have not received any request for protest.