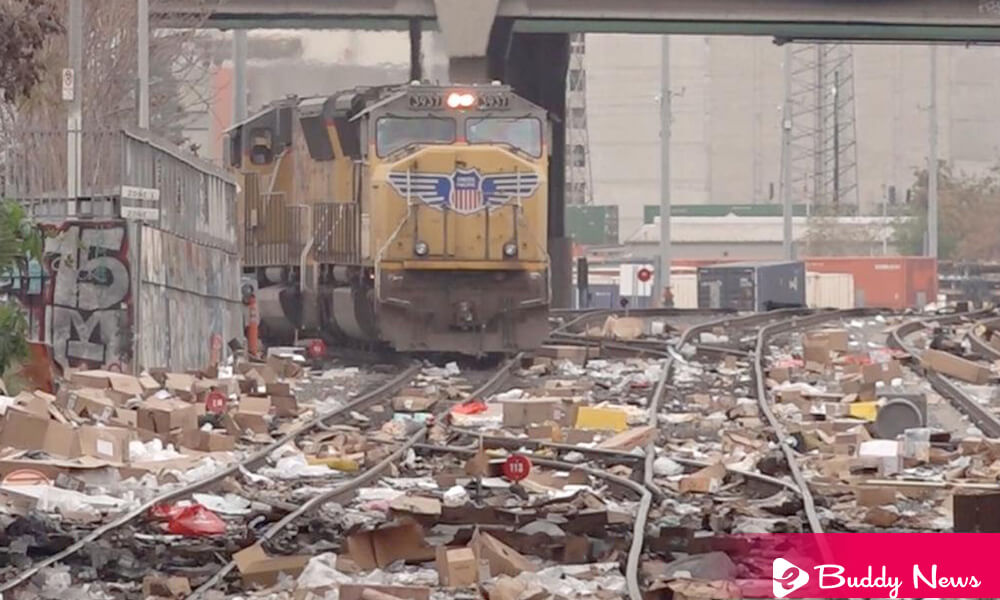 The train tracks in the Los Angeles neighborhood of Lincoln Heights look as if a tornado has passed through, with thousands of boxes, bags, and trash strewn across the rails for blocks. For months, residents of the area say they have watched the chaos unfold at all hours.

Men working as a team open large shipping containers on idle trains then load the stolen goods onto trucks and vans. They jump on a train and climb to the top of containers with power tools or bolt cutters to pry open the large metal crates. Some, they say, thieves continue their looting even when a train is moving.

Christopher Tang, a UCLA Anderson School of Management professor who studies supply chains, said that This must end. It is not the Wild West. Back then, thieves were stealing money, but now they steal merchandise that affects people’s lives.

One of the nation’s largest rail companies, Union Pacific, said it had seen about $5 million in damage and theft. Also, noting that, on average, thieves looting more than 90 shipping containers of train a day in Los Angeles.

The worsening trend is another potential headwind in the nation’s supply chain crisis. It has also reignited Californians’ concerns about organized crime gangs that authorities say are likely fueling these train robberies. And a series of high-profile robberies occurring across the state. The ports of Los Angeles and nearby Long Beach, the two busiest, try to recover after a delay caused largely by COVID-19.

The open boxes, bags, and containers lining the City of Angels’ streets could mean much more than a delayed delivery to your home.

Those products used in the fight against COVID-19, such as face masks, IVs, and large bags of cotton balls, could be seen strewn across the tracks. Also seen are boxes containing electronics and car parts.

Tang said it isn’t great to get a package at your home, but this problem is bigger. Some packages actually could affect someone’s life, specifically if you talk about medical supplies.

Tang said each shipping container could hold thousands of items. But those are crucial to people’s lives and replenishing national shortages. Criminals don’t know what is inside, forcing them to explore items that might not be as valuable. He also added that the thefts also have a surge effect on customers as prices go up to make up for losses.

Though the containers are locked, the experts say it takes a little effort and possibly just a pair of bolt cutters to open.

An expert on mass transit issues and rail safety in Southern California, Keith Millhouse, sees opportunism by organized members. He’ll call them gangs or mobs that have identified a weakness in the supply distribution chains.

Tang agreed and called the railroads the weakest link in the supply chain.

Keith Millhouse said the solutions should be multifaceted, including investing significant amounts of money in security, bolstering patrol officers in the surroundings, and improving fencing. He also said trains could alter scheduling to deter criminals and make it harder for such thefts.

He and others also said more powerful criminal penalties could do a lot to prevent criminals.

Millhouse said that it would take action by law enforcement the freight railroad companies. Maybe changes in criminal sentencing procedures or guidelines make this more difficult to happen and then have consequences when it does happen.