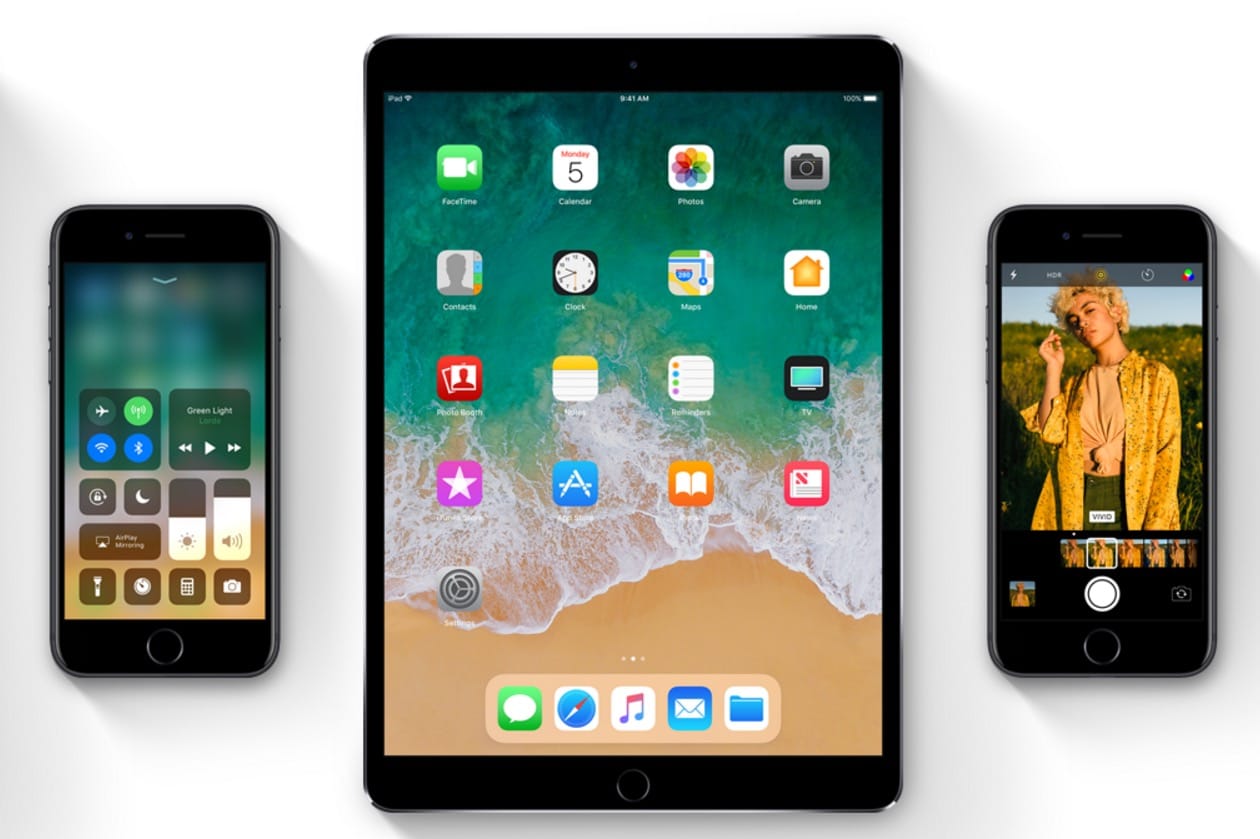 Big day for Apple and for the operating system of the iPhone, and from San Jose have gone at full speed with the news of this. After announcing the renewal of computers, the new MacOS High Sierra and a new iMac Pro, now touches on the features of the new iOS 11.

Beginning with some new features in Messaging and Apple Pay, Craig Federighi focuses on the news of Apple’s assistant, Siri, which incorporates the beta-translation function among other functions. Also new to Photos, which in macOS has received some important additions at the editing level, and a redesign of the Control Center and the App Store.

Starting with Messages and Apple Pay

Apple’s own messaging app was updated last year with entertainment-centric additions and the ability to send rich messages. This time, what we have been shown is that Messages will have a redesigned application drawer for easier use.

Also they have announced improvements in the synchronization of this app and iCloud, and that there will be an optimization in the space that uses Messages thanks to this. All this under end-to-end encryption.

In addition, linking with the new features of Apple’s payment platform, Messages will allow you to easily send money to another person with Apple Pay person-to-person, integrating the payment app into the messaging and simplifying payments.

The Apple Voice Assistant is also included within the image changes that some of your own apps and certain parts of the operating system itself will undergo. Siri in iOS 11 will have a new interface that will show multiple results and have a more natural pronunciation (something they have achieved with deep learning). 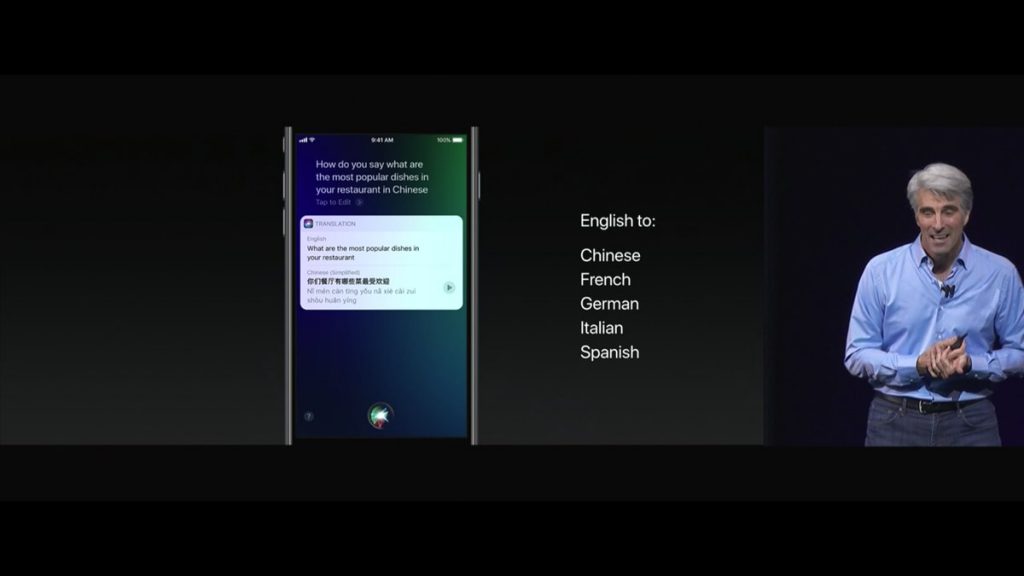 In this new interface and the notifications will integrate the translation, although we will see it currently in beta. The function will initially be available in English in these languages: Chinese, French, German, Spanish and Italian.

The wizard was finally opened to third party services, and within this there are also new features. Siri can be used for task management with third-party apps, and it will also try to anticipate the user running across all compatible devices to better understand the context (not just the voice).

In macOS we have seen how for High Sierra we expect a Photos app with much more advanced editor. To iOS this incorporation comes in the edition section of live photos, which will be more advanced (adding mute , loop and other functions that we see in other video editing apps). 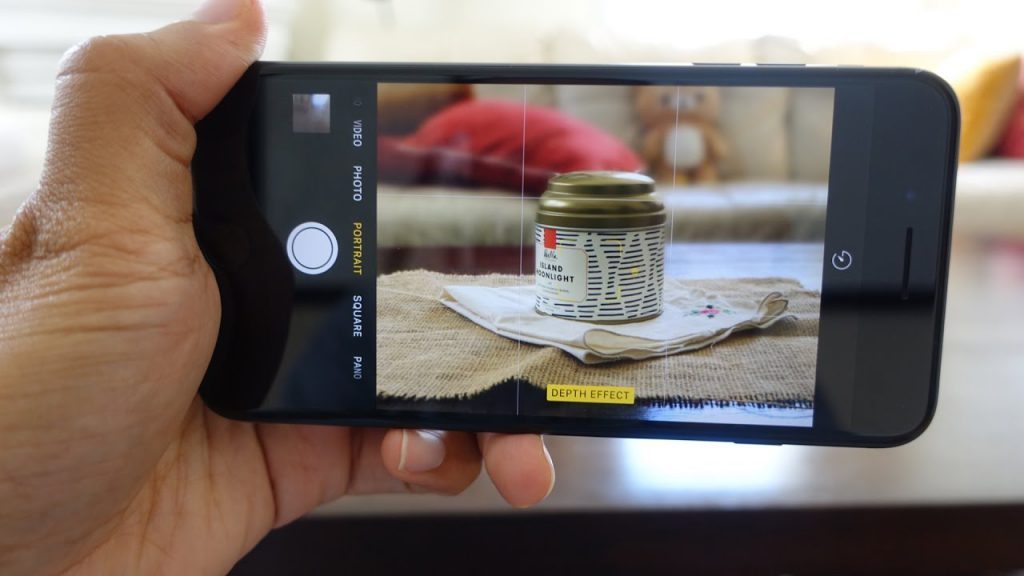 On the other hand, Memories also receives some improvement, being more complete and intelligent and adding different modes of visualization (vertical and horizontal). And for the famous portrait mode they promise quality enhancements in low-light situations and open Depth API for third-party developers.

It ended up having the Control Center divided into two pages with the accesses and switches distributed. With iOS 11 the Control Center integrates all the controls on a single page , without having to slide, and also finally supports 3D Touch, so that its use goes further and can save us a series of taps and leave to go to Settings. 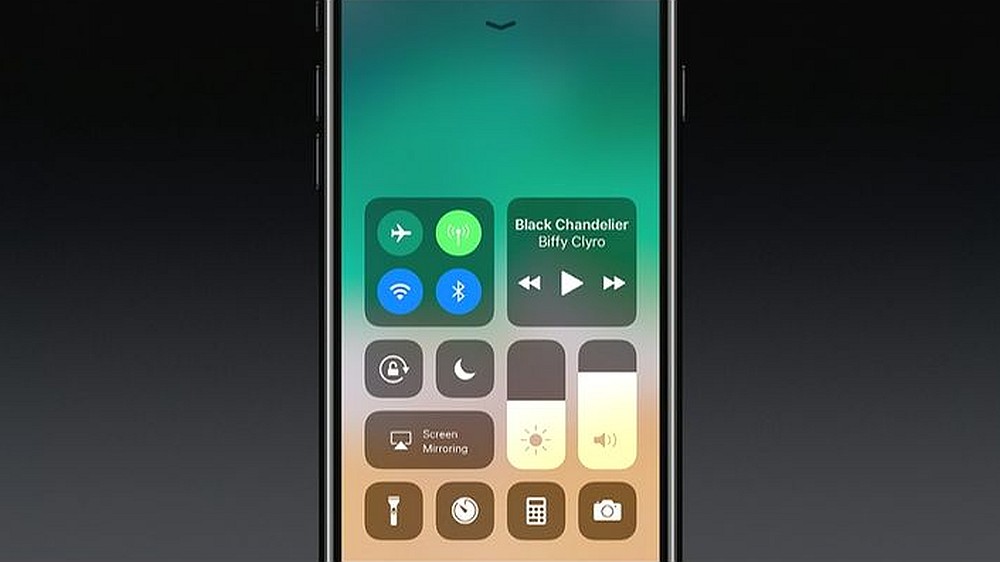 This leaves us in doubt as to whether iPhones and iPads without this technology will have this extension of functionality implanted in some way (for example, by holding down pulsation), at the moment they have not specified it. What they have shown is that there is also redesign for the lock screen and the Notifications Center.

What’s new at the wheel

Apple Maps will now include mall maps, so it can be used to search for locations on the same sites, as well as airports. Also new in navigation mode, including speed limits and a guide to signal the correct lane. 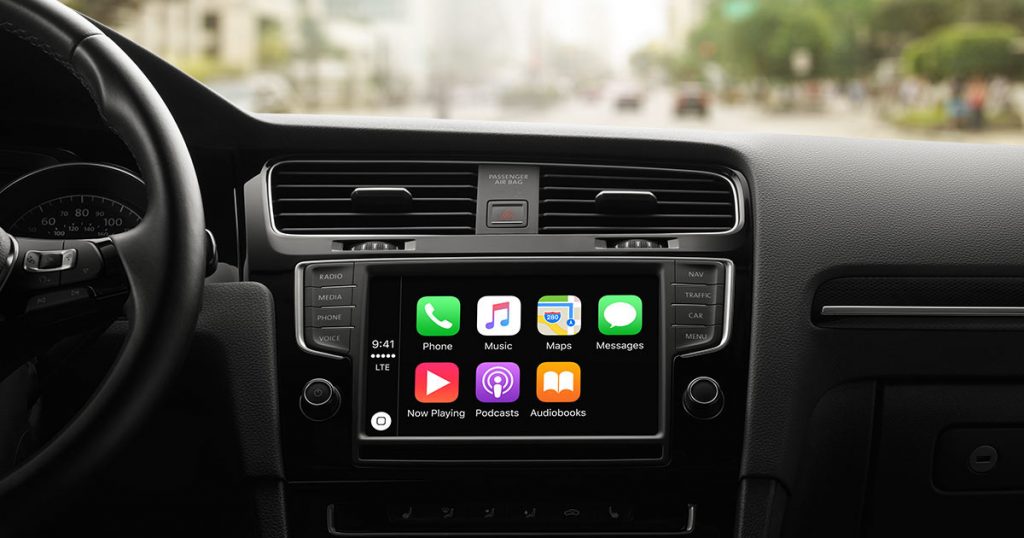 In the age of intelligence in cars to CarPlay also comes the turn. Apple software incorporates the “Do Not Disturb While Driving” feature, which will make notifications non-hassle while driving, and you can set up automatic responses in Messages to give you the warning that we are behind the wheel, as well as establish contacts whose notifications will pass the filter. 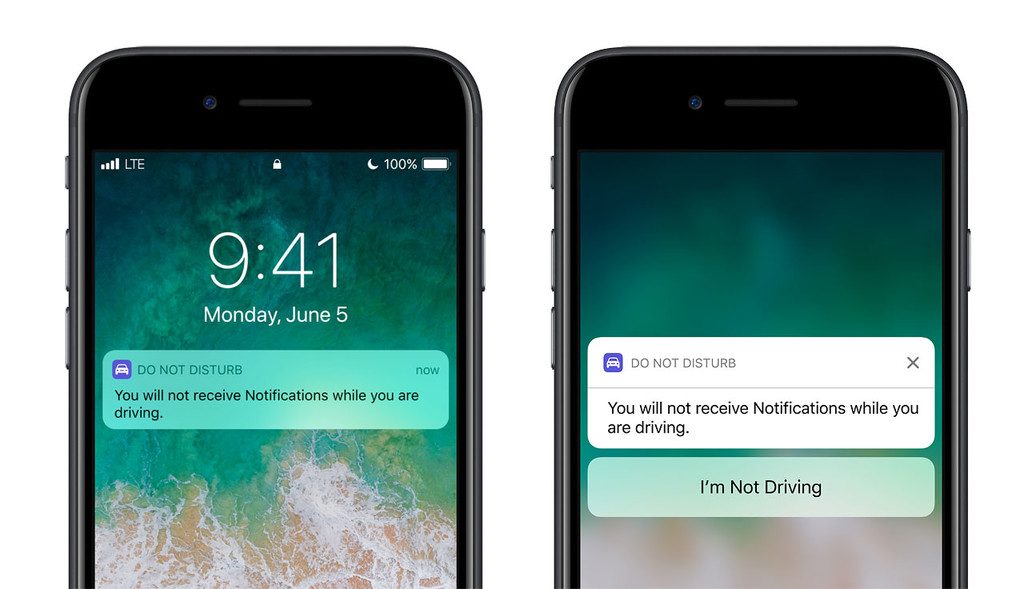 The part of Apple’s home automation that touches iOS is also renewed with a new section on Home called “Loudspeakers. ” From it can be configured these devices, being able to establish different profiles according to room ( multi-room).

Although the fat-sounding new features take the field of hardware with the new speaker that Apple has introduced nothing, HomePod , which integrates six microphones and responds to Siri. And on the other hand, regarding the communication between devices, new version of AirPlay, AirPlay 2, whose API will be available to developers.

If we talk about expected redesigns, that of the App Store has been on the list for nine years. The iOS app takes Apple Music style and incorporates new tabs : “Today” (with selected content) and “Games” (separate section for these apps). 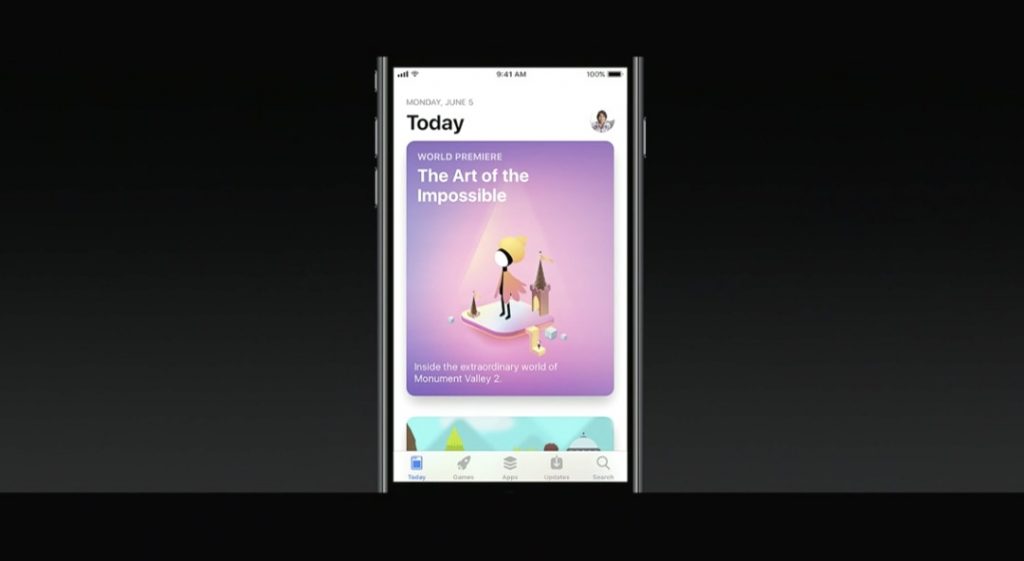 In addition, the tab page of each app is also renewed and incorporates the ability for developers to respond to reviews that users add to each app. These news will be incorporated during the remainder of the year, as they have said.

In addition to talking about virtual reality in the macOS and computers section, there has been dedication to augmented reality with ARKit , the new developer kit to further squeeze this functionality into iOS. 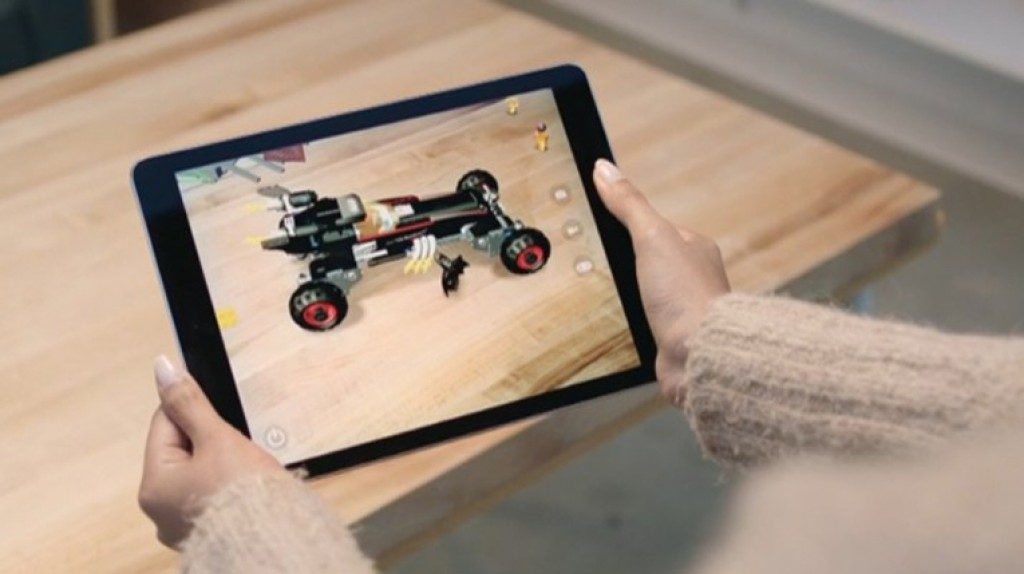 The demo has been quite flashy, with a supposedly improved Pokémon with ARKit and the whole scenario as the background of a game. We have also seen how the camera recognized objects and could add virtual objects over real ones.

A good breakthrough and surprises via iPad

In addition to all this, since Apple have taken advantage to announce some new features that had been left in the form of leakage this morning, but it has not been when talking about iOS. It has been when doing the new iPad Pro , where we have seen Files (file system app) and drag-and-drop. 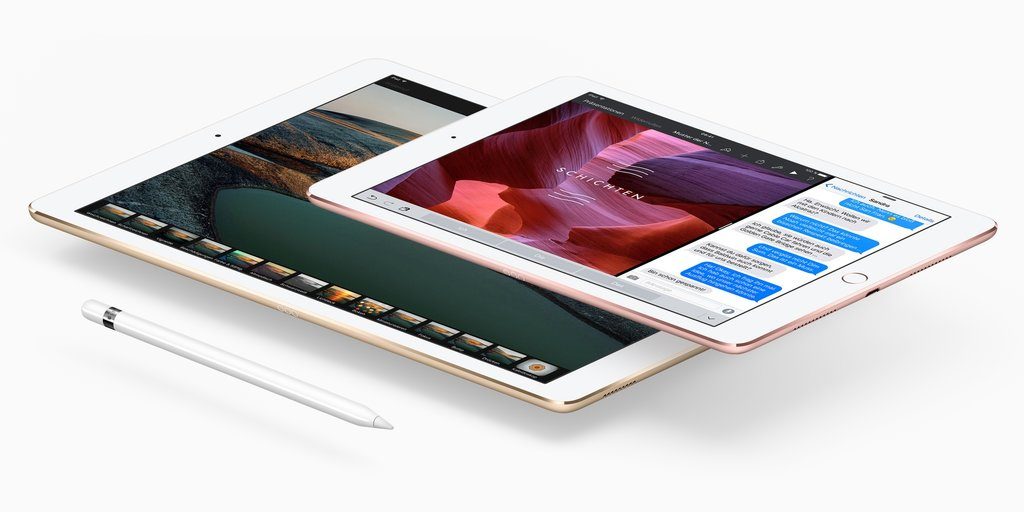 We will see how they incorporate these innovations this fall when the new version of the system is released publicly. At the moment the beta is available for developers, so we will see for now what else is in the hands of these and what they are showing.

Thus, devices compatible with iOS 11 are those that incorporate a chip from the A7. They are the following: