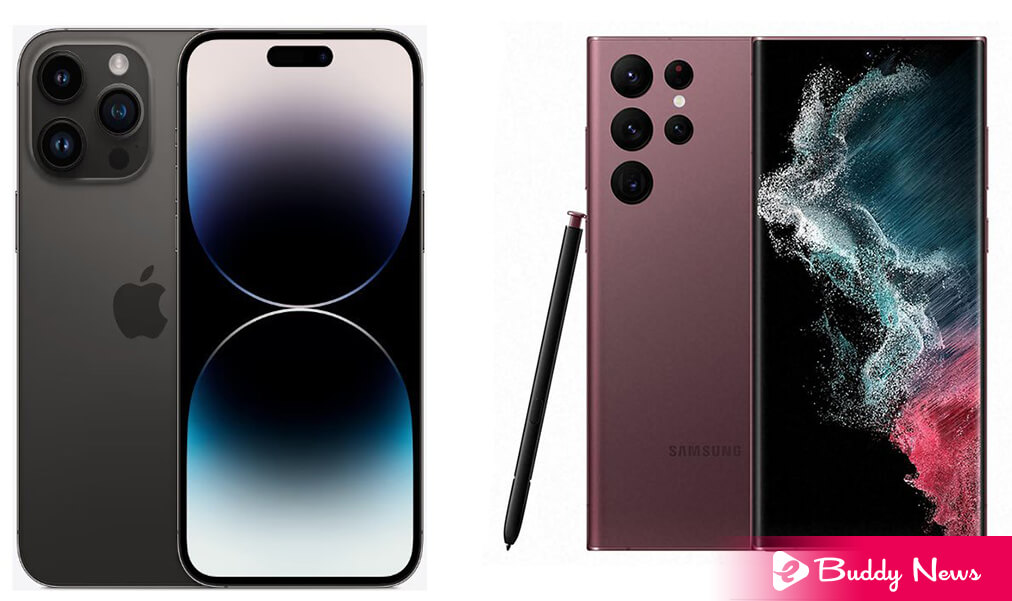 We will compare the iPhone 14 Pro vs Samsung Galaxy S22 Ultra, examining its technical data to analyze its strengths and weaknesses. We also focus on the comparison of the most advanced premium range, with two phones that will sell in the last quarter of 2022.

We have already reviewed the Samsung Galaxy S22 Ultra for those who want to know it better, so now it is time for the comparison against the iPhone 14 Pro and 14 Pro Max. We will analyze them, including the camera, screen, battery, and prices.

Although the big difference between the two is that the ‘Samsung Galaxy S22 Ultra’ uses ‘Android’ as its operating system, and the ‘iPhone 14 Pro’ opts for ‘iOS,’ it is the least analysis you need.

The operating system depends greatly on the user’s preferences and whether they have more Apple devices or bet on the Android ecosystem, which is more heterogeneous thanks to competition between manufacturers.

Therefore, we have to focus on the comparison of the hardware of some smartphones that offer us a very high level in all its aspects:

When comparing the technical data sheets of both smartphones, we see that Samsung stands at the top with almost all its specifications. However, that does not always symbolize a better practice because the number sometimes does not translate into a real advantage.

In any case, let’s see the comparison of features:

Photography is a key aspect of the iPhone 14 Pro vs. Samsung Galaxy S22 Ultra comparison, and both offer high-quality cameras. Not all sensors have a lot of megapixels because that is only one of the factors in getting good images, and several variables come into play.

In the iPhone 14 Pro, the main sensor goes up to 48 MP f / 1.78 (before it was 12 MP), maintaining valuable optical stabilization (OIS). It still takes 12MP photos, stitching the pixels together in four groups to capture more light.

The 12 MP f/2.2 wide-angle camera has also been revamped. According to Apple, it now performs three times better at night. For its part, the FaceTime camera (front) has a better sensor (the aperture drops from f / 2.2 to f / 1.9), maintaining the previous resolution of 12 MP.

The 12 MP f/2.8 telephoto camera remains the same, with an optical zoom of x3. The LiDAR depth sensor for portrait or bokeh mode is also maintained.

As for screens, the comparison is very close for the first time in several generations, as Apple has applied many improvements to the iPhone 14 Pro. The sizes will remain at 6.1 inches (iPhone 14 Pro) and 6.7 inches (14ProMax).

The great novelty is a refresh at 120 Hz that will increase fluidity, something already present in many Android ranges for a long time. It will be an adaptive refresh that can go down to 1 Hz to save battery power in tasks without fluidity, such as reading an ebook.

All models support always-on-display (AOD), a mode that shows the time, battery level, and notifications simultaneously (with the phone locked), keeping consumption low. It is not new in the Android ecosystem, but the iPhone 14 Pro can use the entire screen in always-on mode.

The Samsung Galaxy S22 Ultra integrates the selfie camera in a small hole in the upper center of the screen. However, to house Touch ID facial recognition, the hole is larger and oval in shape. The iPhone 14 Pro does the same, eliminating the notch.

iOS 16 introduces an eye-catching interface called Dynamic Island, where notifications and other interface elements are generated from the hole with colorful animations.

Comparing the processors of these mobiles shows the first disadvantage. The disadvantage of the Galaxy S22 Ultra is it uses a ‘Qualcomm Snapdragon 8 Gen 1’ in the United States and opts for a ‘Samsung-Exynos 2200’ in the rest of the world. That has been the strategy that Samsung has applied for years.

They are similar chips in their datasheet, but the ‘Exynos 2200 is inferior’ in practice, which is hardly justifiable in such an expensive Smartphone.

The iPhone 14 Pro will have a ‘new 6-core Apple A16 Bionic’ processor, with five graphics cores and 16 dedicated to artificial intelligence. It would mean a significant enhancement in power, supported by using LPDDR5-type RAM instead of the LPDDR4x that integrates the iPhone 13.

Samsung has opted for a large ‘5,000 mAh battery in the Galaxy S22 Ultra,’ while we expect a smaller capacity in the iPhone 14 Pro, as is usual for Apple. However, the iOS 16 operating system and the A16 Bionic chip will probably maintain the autonomy of previous generations.

Samsung has never excelled at fast charging. However, neither has Apple, so both are on a discreet level. Of course, the iPhone 14 Pro requires a proprietary MagSafe charger for wireless charging (a Qi charger takes twice as long). It does not support reverse wireless charging of smartwatches, headphones, or other mobiles.

Unfortunately, the iPhone 14 Pro will almost certainly keep the Lightning port, and the rumored jump to USB C will have to wait. Now, given that USB C has been very well received on iPads, and that continues to pressure Apple to use a standard connector, it is likely that the iPhone 15 will integrate USB C.

Samsung and Apple have very different approaches when it comes to biometrics. The Galaxy S22 Ultra has an efficient ultrasonic fingerprint sensor hidden under the screen, complemented by facial recognition. It is not very reliable since it is based on the selfie camera without detecting the depth of the face.

The iPhone 14 Pro integrates Face ID, a secure facial recognition that scans the face 3D. It will not bring a Touch ID fingerprint reader under the screen despite previous rumors. However, it could arrive in future generations.

The two phones have IP68 resistance to dust and water, so they are tied in the comparison. Samsung uses the resistant Gorilla Glass Victus+ glass on its exterior, while Apple opts for the so-called Ceramic Shield.

They behave well against scratches, but their greater resistance to falls should not deceive us. They are still very delicate phones that we should cover with a case and a screen protector.

Finally, the Galaxy S22 Ultra comes with Samsung’s S Pen stylus, with a hole to store on the phone itself. At the same time, Apple did not design the Apple Pencil for iPhones.

As an exclusive, the iPhone 14 integrates a system to send emergency messages by satellite, even where there is no mobile coverage, and car accident detection so that the phone calls for help in the event of a major crash.

The Samsung Galaxy S22 Ultra and the iPhone 14 Pro and 14 Pro Max are among the most expensive phones on the market, excluding folding phones. The price difference between them is not very high. However, Samsung applies discounts over the months, which Apple rarely does.

The Galaxy S22 Ultra has been on the market since February 2022, as the manufacturer launches its flagship model in the year’s first half. The second half is reserved for foldable, in this case, the Samsung Galaxy Z Fold 4 and Flip 4.

More common is the offer of the reduced 12 GB + 256 GB variant, for example, a small discount for the 1,199 dollars that the base model costs. Regarding the iPhone 14 Pro, it won’t be easy to find offers or discounts, even after months on the market, since Apple has a very strict pricing policy.

In all cases, it is possible to obtain discounts when delivering our previous mobile, especially if it is of the same brand as the one we will buy. We are talking about a significant discount as long as a recent, high-end cell phone is in good condition, which decreases if these conditions are not met.

In addition, there are financing options and lower prices with a telecommunications operator. Depending on the country, it may be something to take into account. For example, in another country, the operators focus on financing, while in the United States, they apply more aggressive discounts.

In conclusion, the comparison between iPhone 14 Pro and Samsung Galaxy S22 Ultra presents two very high-level smartphones, where it is impossible to give a clear winner. Whether we prefer the Android or iOS operating system is key, more than the hardware itself, depending on our tastes and needs.