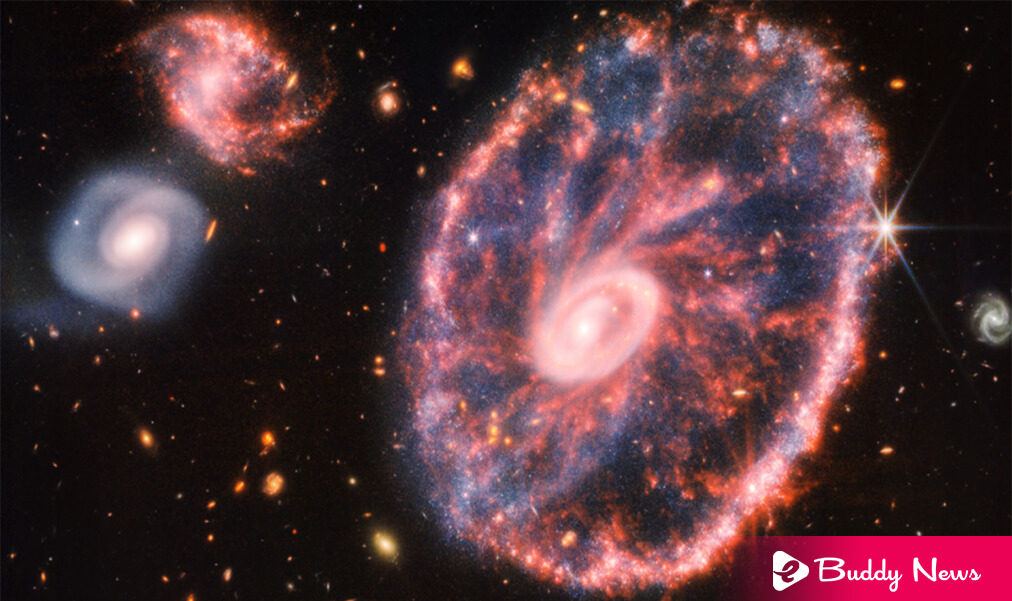 This peculiar galaxy does not appear alone. James Webb Space Telescope captures a powerful infrared gaze with a detailed image of the Cartwheel Galaxy. Further, it captures two smaller companion galaxies in the domain of many other galaxies.

The American NASA and the Agency point out in press releases that the snapshot also reveals the behavior of the black hole within the galactic center of the galaxy. Also, it provides a new view of how it has evolved for countless years.

Its appearance, much like that of a cartwheel, is the result of an extreme event: a high-speed collision between a large spiral galaxy and a smaller one, not visible in this image.

Collisions of galactic consonance forever cause a deluge of different and smaller events between the galaxies. Of course, Cartwheel is no exception to that. The collision especially affects its shape and structure.

We see that galaxy has two rings. One bright inner ones and colored surroundings are there. The so-called things expand outward from the center of the collision. We see them as ripples in a pond.

Astronomers call it a ring galaxy because of its distinctive features. It appears like a less common structure than spiral galaxies like the Milky Way.

The bright core has a huge amount of hot dust. Further, the brightest areas are home to gigantic clusters of young stars. 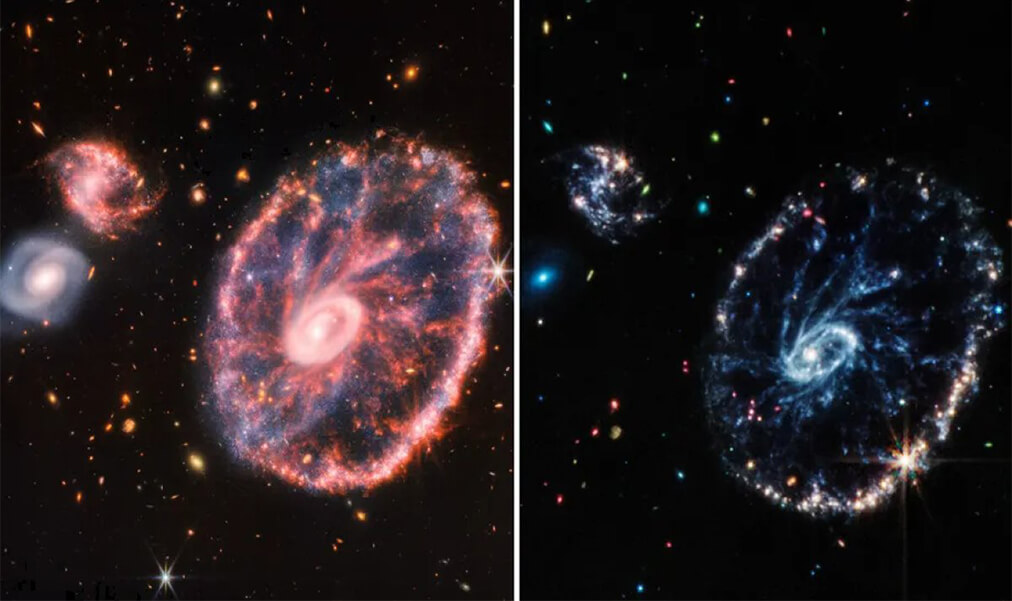 On the other hand, the outer ring has been expanding for about 440 million years. Further, Star formation and supernovae dominate it. As the ring expands, it penetrates the surrounding gas and triggers star formation.

It is not the first time a telescope has captured an image of this stellar group. Hubble did it, for example, but the mystery surrounded the dramatic galaxy. It might be, perhaps, given the dust that obscures the view. Thus they point out NASA and ESA.

With its ability to detect infrared light, the Webb is now discovering new information about its nature.

For example, the information collected by the MIRI instrument reveals regions within the galaxy rich in hydrocarbons, other chemical compounds, and silicate dust.

The said regions form a series of spiral spokes. They essentially form the skeleton of the galaxy. People had already seen these in Hubble’s observations published in 2018. However, they become much more prominent in this Webb image.

The photo underscores the Web. It shows that Cartwheel is in a very transitional stage. The galaxy, presumably a normal spiral galaxy like the Milky Way before its collision, will continue to transform.

Webb offers a photograph of the current state of the galaxy. He provides a glimpse of what has happened to this galaxy and how it will evolve in the future.

The collaboration of NASA, ESA, and the Canadian CSA has made the James Webb, and it knew the first image on July 11.

On its Twitter account, NASA said that Webb is on a roll! While ESA wrote who’s ready for stellar gymnastics? The beautiful new image of Webb unveils new details about the formation of stars and black holes.