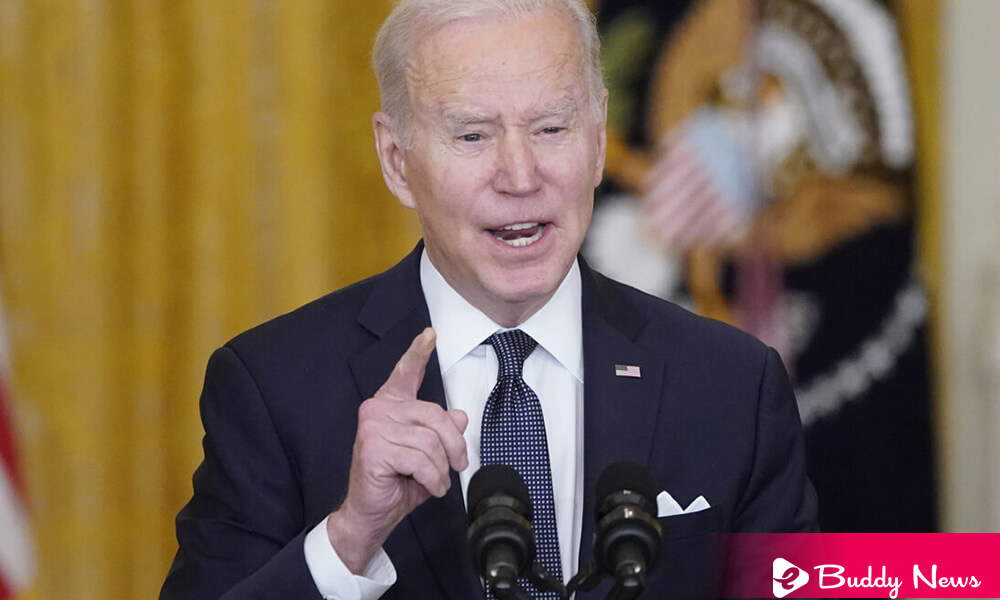 The president of the United States, Joe Biden, announced a series of sanctions against Russia, cutting off its financing from the West and punishing its banks and its wealthy elite. Biden says  this retaliation for the beginning of an invasion of Ukraine.’

After a discreet first reaction after Vladimir Putin’s speech, Washington raised its voice.

Biden said it’s the beginning of an invasion of Ukraine during a White House address. He warned that Putin is crafting justifications for going much further.

In response, the United States will immediately impose the first round of sanctions that should cut off the Russian government from Western funding, the president announced. They are enforcing sanctions on the sovereign debt of Russia.

Also targeted financial sector when decreed the total blockade against the VEB, the public development bank, and the PSB, linked to the defense sector.

The American president also decided to sanction the Russian elites and their families. He said they share the dishonest gains from the Kremlin’s policies, and they must share the pain as well. In the list, the head of the Russian intelligence service (FSB), Alexandre Bortnikov also there.

Through a decree, Biden had already prohibited any new investment, exchange, or financing by Americans destined for, coming from or within the pro-Russian regions of Donetsk and Lugansk. Though the regions already had strongly limited ties to the United States.

To prevent any accusation of excessive caution, his spokeswoman Jen Psaki stressed that he would add these sanctions to swift and severe economic measures. He added these measures prepared by Washington and its allies in the event of an invasion.

The United States threatened, for example, to cut off Russian banks’ access to dollar transactions and to prohibit the sale of US technology to Russia.

A senior US official cautioned that no Russian financial institution is safe if the incursion proceeds.

The official who asked not to allow identification said that new attacks against Ukraine could lead to sanctions against the big banks Sberbank and VTB.

Biden Hopes For A Diplomatic Solution

Furthermore, he added that export controls that would stop the flow of high-tech components to Russia are also a key element of our potential sanctions. He calls such measures really powerful because they are crucial technology Russia needs to diversify its economy.

US president Biden is under pressure from the American political class. They want him to respond firmly.

After explaining the Moscow ploys as a declaration of war, the White House has not taken a step so far. Republican Senator Lindsey Graham called on the United States to destroy the ruble and Russian currency and crush the Russian oil and gas tanker sector.

Joe Biden pointed to Russia as the aggressor but argued that there is still time to evade the worst scenario. It will cause enormous suffering to millions of people. He recalled that his country still hopes to find a solution diplomat.

He concluded that we would judge Russia by its actions, not its words. He hopes that the diplomatic channel remains open. And whatever Russia does following, they are prepared to respond with unity, clarity, and conviction.

Regularly accused of going alone on international issues, the United States has promised to coordinate closely with its European partners on the Ukrainian case.

The US president authorized the deployment of US troops in the Baltic countries, Estonia, Latvia, and Lithuania. Determined to show his support for Kyiv as tensions escalate, Biden met with the head of Ukrainian diplomacy to reaffirm his support.

Also, the United States welcomed the sanctions taken from the other side of the Atlantic against Moscow. It especially the suspension by Berlin of the authorization of the controversial Nord Stream 2 gas pipeline, which Washington has been denouncing for some time.

The president said he had worked with Germany to ensure that Nord Stream 2 does not proceed, as promised.

The senior US official said that decision would free Europe from the geostrategic throttling of Russia through natural gas supply.