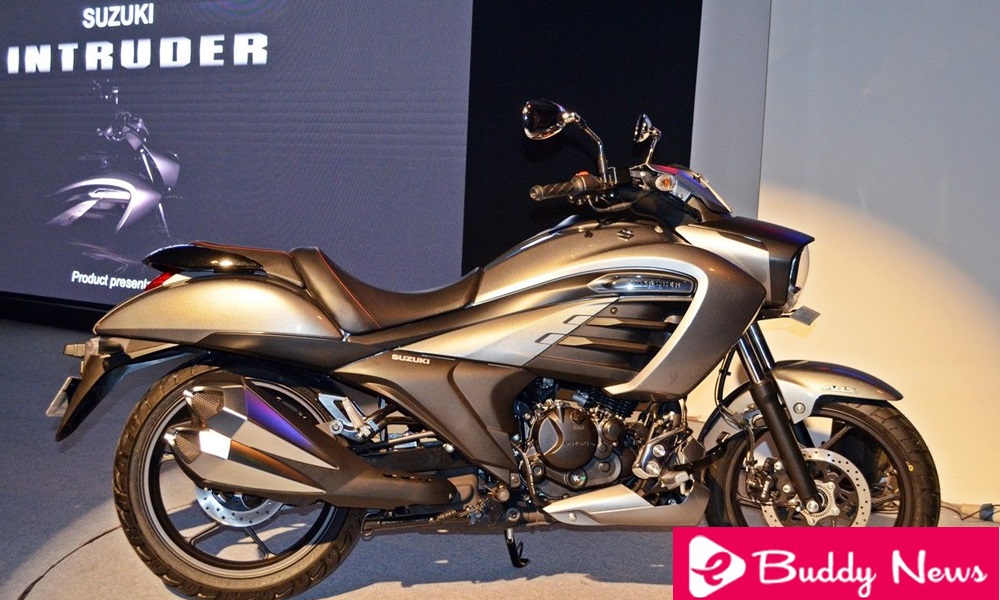 Among all the motorcycles, Suzuki intruder model is customized. Suzuki Intruder best suits for long trips and its classic look. 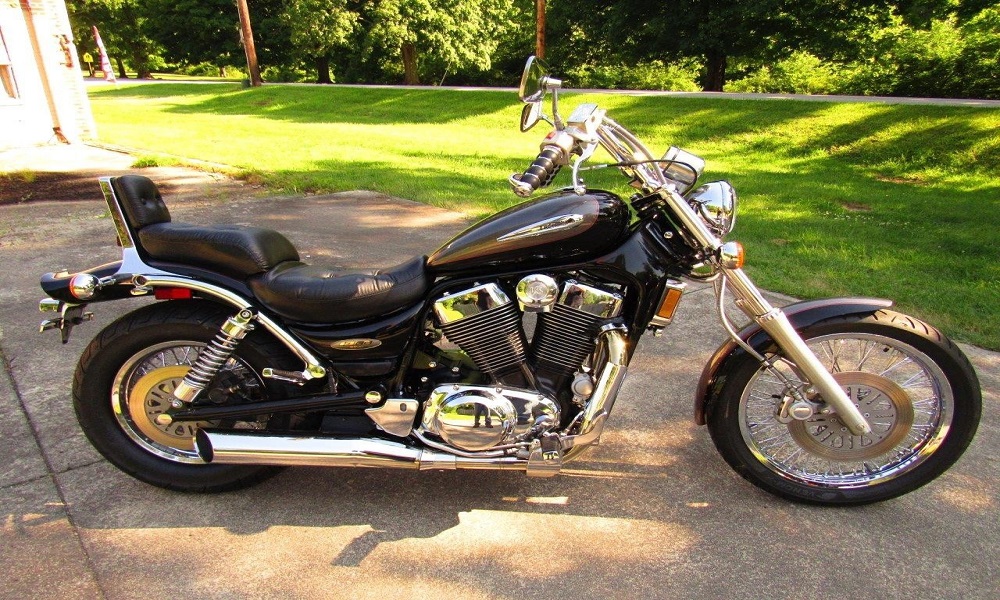 Suzuki Intruder VS 1400 mostly customized for Japanese market initially but, now launched across the world. This bike launched in mid-1993 excelled in the “chopper” style, being taller and with higher handlebars than a conventional custom. In 1993’s bikes paid attention to a great look, interesting details, and finishing.

The model has two-cylinder “V” engine, with an inclination angle of 45º, air cooling, of 1,360cc, capable of developing about 67 horsepower and 10.5 kgfm of torque. Due to this high torque, the bike had a good start. The engine fitted with a pair of 36-millimeter Keihin carburetors, one installed inside the “V” of the cylinders and one behind the rear cylinder. The equipment also includes manual gearbox of five gears and final transmission by cardan shaft. Moreover, The Suzuki Intruder with 1.400 engine also offers fuel tank with a capacity of 13 liters (including reserve), disc brake on both wheels. According to the data from Suzuki, this model can reach a top speed of about 175 km / h. The Intruder VS 1400 is 2.33 meters long, 0.77 m wide and 1.22 m high. It has a weight of 242 kg to dry. 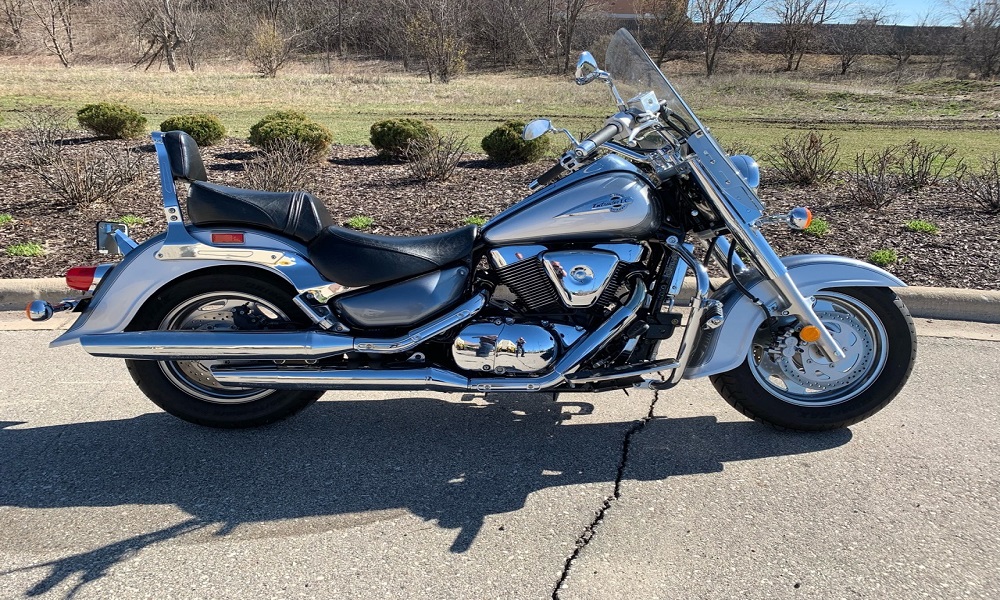 Such a propeller provided with three valves per cylinder, powered by two 36 mm vacuum carburetors.

Amongst the highlights, the Suzuki Intruder VL 1500 features a very classic look with prominent front mudflaps and chrome trim on all sides, such as the sticks, front optical assembly, dual exhaust, external engine parts, among others.

There is also an instrument panel with a liquid crystal display that displays total odometer, partial odometer and fuel gauge.

The suspension of the motorcycle has a muffled rear system with shock absorbents, gas with loading and progressive system “Link” type with adjustment

The front has oil-cushioned telescopic suspension. It also has a high precision digital ignition system with automatic decompression, which makes the engine drive more efficient and agile.

At the time, the Suzuki Intruder VL 1500 offered at a price of US $ 25 thousand (approximately US $ 30 thousand considering the US dollar quotation in December 1998), in black and silver, black and green, yellow or red.

This model was part of the Japanese brand line in Brazil until the middle of 2005. 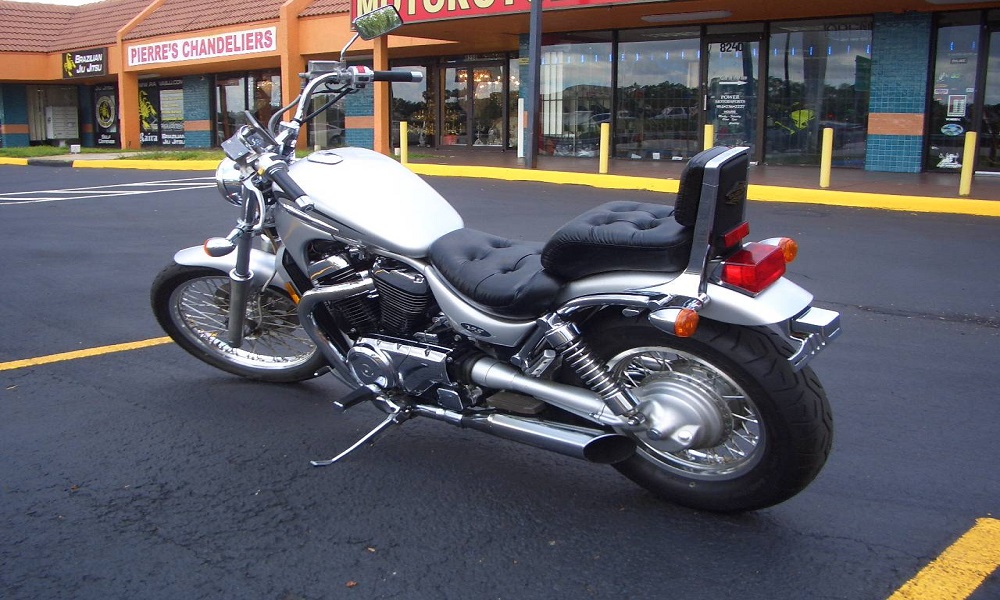 Suzuki Intruder VS 800 introduced in the year 800. It is one of the oldest Asian Models among Suzuki motorcycles.

The engine used in this model is a four stroke, two-cylinder “V” with 45º incline and four valves per cylinder, with 805 CC. It powered by two Mikuni carburetors.

55 horsepower and 6.5 kgfm of torque, with a five-speed gearbox and final transmission by cardan shaft, is an inbuilt feature.

Although it has lower horsepower and torque than the larger sisters, the Intruder VS 800 also excelled by its good performance, especially in situations requiring more torque (such as kick-offs). After all, it weighs 201 kg, or 41 kg less than the Intruder VS 1400. The maximum speed of the model is about 165 km / h.

In visual terms, the Suzuki Intruder VS 800 features more classic and minimalist shapes. A huge 19-inch wheel, 80/90 R19 sidewalk, and protected by a shorter para-mud at the front end.

The fuel tank with capacity for 12 liters compact and angled. The seats are individual for pilot and passenger, on two levels, the latter with rear lumbar support.

In addition, it follows the same style of the other custom/chopper on sale in the market, with the engine quite apparent and with chrome finish, equipped with an exhaust system also quite pronounced.

Chromados are also present in several other points, such as the headlight, dashboard, rear shock absorbents, and tail.

The Suzuki Intruder VS 800 can be found in the 0 km motorcycle range of the Japanese brand in Brazil by the middle of 2003. 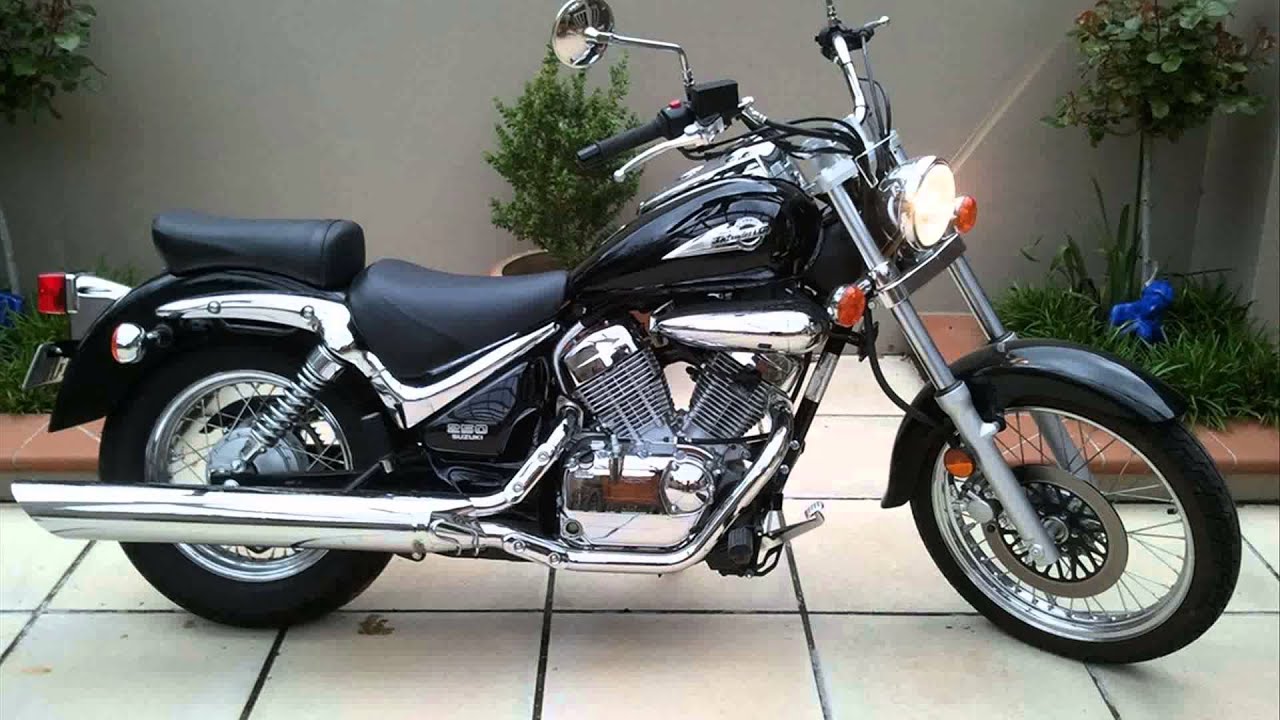 Many other motorcycles were being introduced into the low-end market for day to day use. The bike was designed with higher riding position, a great distance from the seat to the ground, raised handlebars and less flexed legs.

The Intruder 250, is versatile towards the street world. Intruder 250 was inspired by the motorcycles of the 1980s

But in this case, in order to become a more versatile model, the Intruder 250 also bet on ways more towards the “street” world. That is, higher riding position, with greater distance from the seat to the ground, raised handlebars and less flexed legs. Only the fuel tank and the side fairing had painted. The remainder was predominantly chrome-plated, including para-mud, headlamp, dashboard, tailpiece, crank handle, engine, and exhaust tip.

However, the design was just the main Achilles heel of Suzuki. The motorcycle suffered from having rather old-fashioned forms for the time, even having the proposition of being a custom appealing to the more classic side of the thing.

The Suzuki Intruder 250’s design was not so good than the competitors. The Intruder 250 features a single-cylinder, air-cooled four-stroke engine that develops 22 horsepower at 8,000 rpm. It also contains 1.9 kgfm of torque at 5,500 rpm, coupled to a five-speed gearbox and final transmission by the current.

The Suzuki Intruder 250 is also quite comfortable. Comfort guaranteed by long-stroke suspensions and the bench is relatively long and wide for both driver and rider.

However, when Suzuki Intruder 250 was launched it was priced at $ 4,588, the equivalent of approximately $ 4,900 considering the dollar’s price at that time. Suzuki sold the model with a warranty of only one year or 12 thousand kilometers. Sometime later, in 2001, when it was about to be discontinued in Brazil, the Suzuki entry custom could be found in the dealership network for Rs $ 6,290.

The Intruder 250 competed directly with the Yamaha Virago 250. Other than that, the Virago 250 has a two-cylinder “V” air-cooled, 21-horsepower engine. The snoring coming out of the two exhausts is serious and imposes respect.

On the other hand, the Yamaha Virago 250 is much more expensive than the model Suzuki Intruder 250: it is sold for almost R $ 9 thousand. 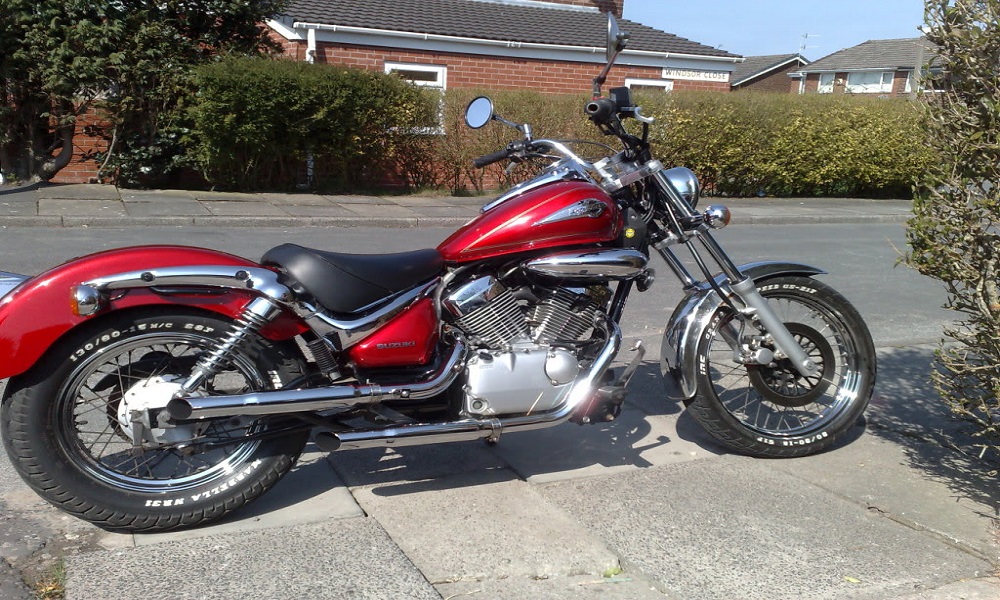 The Intruder 125, in addition to being the smallest and cheapest model of the Intruder line of Suzuki in the Country, was also the last one to arrive here.

To keep up with the success of sister Intruder 250, the 125 models arrived here in June of 2002. The motorcycle attracted attention by not betting on the street style, as did its rivals Honda CG 125 and Yamaha YBR 125.

It launched there in 1982 as “Suzuki GN 125”. The name “Intruder 125” used only in the Brazilian market, precisely to link the image of the model to the larger custom motorcycles of the Suzuki line there.

The motorcycle differentiated by the long-stroke front suspension, front mudguards, rear mirrors, chrome exhaust tail and tail, and wider, wider and comfortable seat. At the rear, a chrome-plated luggage compartment offered the motorcycle user the ability to carry small items.

At the time, Suzuki said that the Intruder 125 combined the agility of a street motorcycle. The comfort of a custom model and the economy of a 125 introduced in Suzuki Intruder 125. It has a four-stroke, single-cylinder, air-cooled, OHC engine, 124CC, capable of developing 0.8 kgfm of torque at 8,500 rpm. The fuel tank has a capacity of 10.3 liters.

The engine has a 0.85-liter oil reservoir. The Intruder 125 chassis is “Diamond” type, with front suspension with a telescopic fork and rear suspension with articulated balance. The front brake is the disc, while the rear brake is the drum. In the measurements, the first model of the Intruder 125 is 1.94 meters long, 0.8 m wide and 1.1 m high, with wheelbase 1.28 m. The weight of Suzuki’s entry motorcycle is 107 kg dry.

The first trailer of the Suzuki Intruder 125 arrived here costing about $ 4,300, available in blue, black and red. Many saw the motorcycle as an old-fashioned, but not “classic” visual model.

The engine started to respond in a smaller rotation, making the motorcycle smarter and also more economical.

On a daily basis, these changes represent improvements in driving, leaving the most enjoyable bike to ride, with better speed returns and lower fuel consumption. During tests, the Intruder 125 recorded an average consumption of 33 km / l.

It may seem like an exaggeration to treat the Suzuki Intruder 125 as a custom. The motorcycle is far from being a lanyard like your old sisters. However, it goes against the competitors cited above for using more classic forms.

Among the novelties, the 125 cc propeller adopted new butterflies and carburetor calibration, which yielded an increase of 1 horse in the final power. The introduction of the pollutant emission reduction system to the bike, known as “PAIR”.

In line 2012, the motorcycle has received new mechanical enhancements to meet the requirements of Prompt 3.

Since then, however, the Suzuki Intruder 125 has gone without major changes. It discontinued in May 2007 to make room for Hague Chopper Road 150, also imported by J Toledo, which had a similar proposal as the Intruder 125 and today it costs $ 7,587.