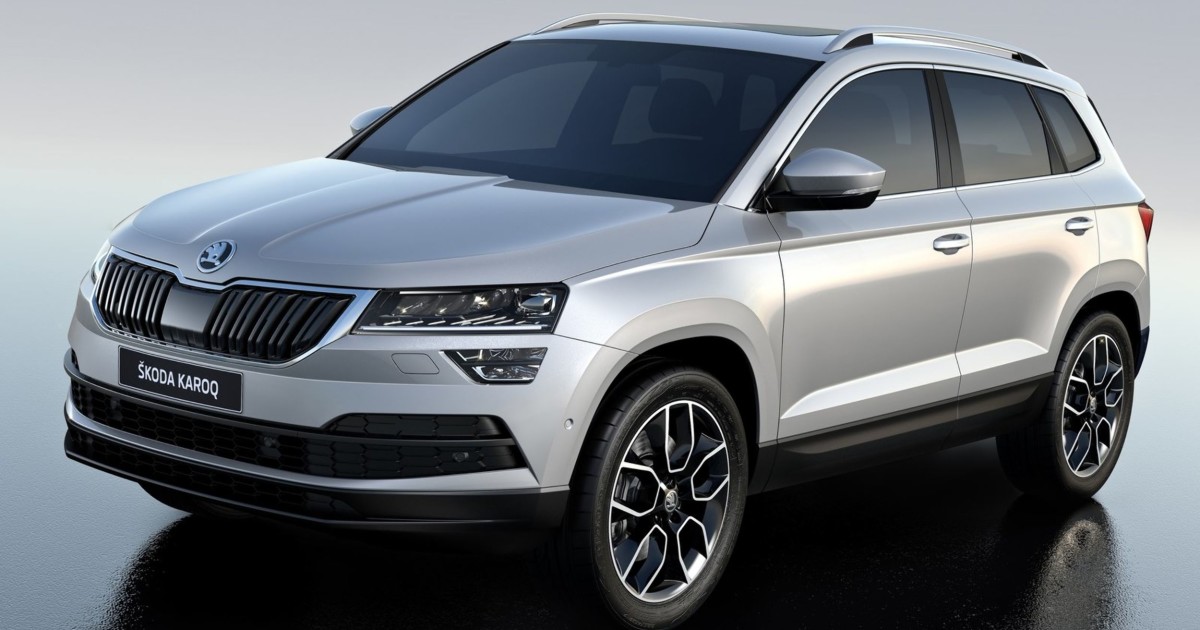 The “Simply Clever” is not just a phrase created by Skoda to identify itself, it is a way of being and making cars that thanks to the quality that it places in its products, the intelligent functionality of them and the ever better positioning in the market, gain more and more adepts. Kodiaq is the latest example of a “Simply Clever” SUV and Skoda Karoq promises to be the same or even better. We will see this later in the first essay I will do sooner. For now know the news of Skoda Karoq, the model that has the task of occupying the place left vacated by the Yeti.

Made on the basis of the MQB platform that also serves the Ateca, for example, the Skoda Karoq was designed to offer generous space for occupants and in the luggage compartment, with a rigid structure capable of walking on and off-road. In addition to the typical Skoda style interior, the Czech house offered the Skoda Karoq VarioFlex seats with three individual seats, the two of which can be advanced or retracted and can be advanced to the center in a cross-over. All seats can be adjusted in height, tilt, back and can be folded back.

The rear door has electric opening/closing and, in the “Simply Clever” spirit, the towbar is retractable through an electric control. That is, it is always present in the car.

In terms of dimensions, the Skoda Karoq is 4382 mm long, 2630 mm wheelbase, 1841 mm wide (2025 mm with mirrors) and 1603 mm high. The front track measures 1576 mm and the rear track is 1541 mm. Inside, the Karoq measures in width, 1486 mm in the front seats, 1451 mm in the rear seats and 1003 mm in the luggage compartment which, it is said, has a capacity of 521 liters which can reach 1630 liters with the folding of the seats. If you remove the seats – which are handled with just one hand, without difficulty – the luggage compartment reaches 1810 liters. The luggage compartment is 756 mm deep. The ground clearance is 183 mm, the input angle is 19.9 degrees, the output angle is 27.6 degrees. As we said above, the rear gate has an electric opening and can be opened from the outside with a foot gesture under the bumper. 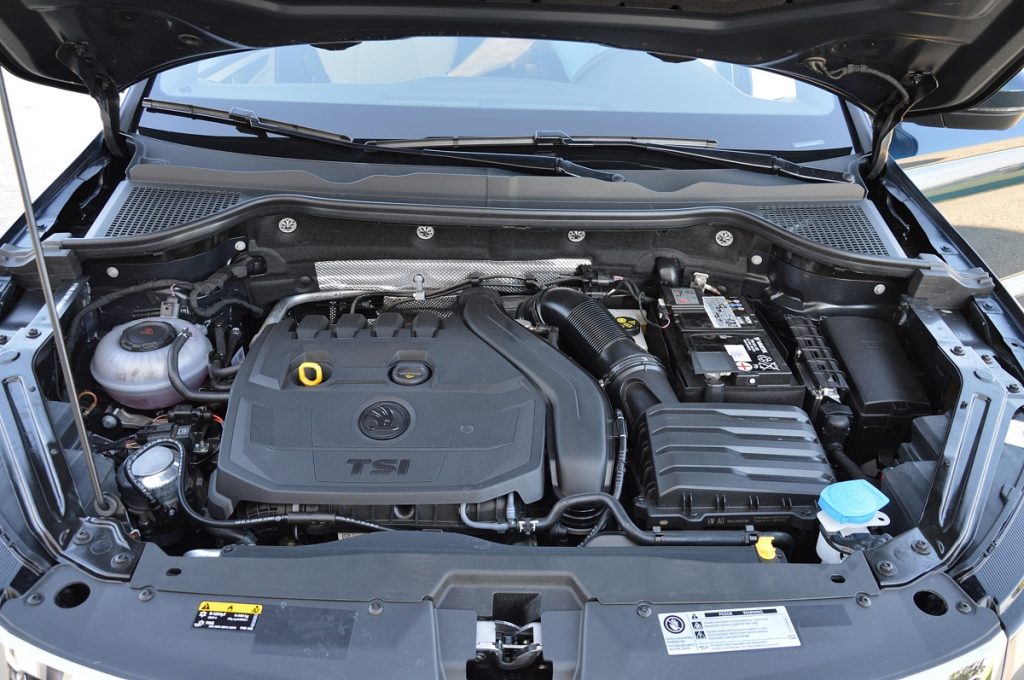 The Karoq will have five engines available (two petrol and three diesel) with powers between 115 and 190 hp. On the petrol side, the 1.0 TSI three-cylinder unit has 115 hp and the 1.5 TSI 150 hp. On the diesel side, we have the 1.6 TDI with 115 hp and 2.0 TDI with 150 and 190 hp, this engine is equipped with all-wheel drive and DSG 7-speed gearbox. The rest are satisfied with the 6-speed manual transmission as standard, the DSG being optional for all engines. Say that the TSI 1.5 has the Active Cylinder Technology (ACT) system that turns off two cylinders when the engine runs low on load. Both versions of the 2.0 TDI have SCR system. The consumption of the gasoline engines exhibits average consumption between 5.2 and 5.7 liters (depending on the versions being 4×2 or 4×4 and with manual gearbox or DSG), while in diesel blocks it oscillates between 4.

The Skoda Karoq can be equipped with piloted buffers, which change the way it is according to the mode chosen in the Dynamic Chassis Control (Comfort, Normal and Sport). You can also choose the driving mode in the Driving Mode Select, between Normal, Eco, Sport and Individual. The Karoq, depending on the version, can tow up to 2 tons of weight.

For 4×4 variants, there is an electronic self-locking differential, a Snow mode for walking on slippery floors (which increases ABS tuning for these conditions) and the Off-Road mode, activated by the touch of a button, modifies ESP behavior, control traction, and electronic self-locking differential. The slope start and fall help systems are activated and the ABS changes from tuning allowing some locking to create a kind of wedge on the front wheels, thus increasing the braking capacity. 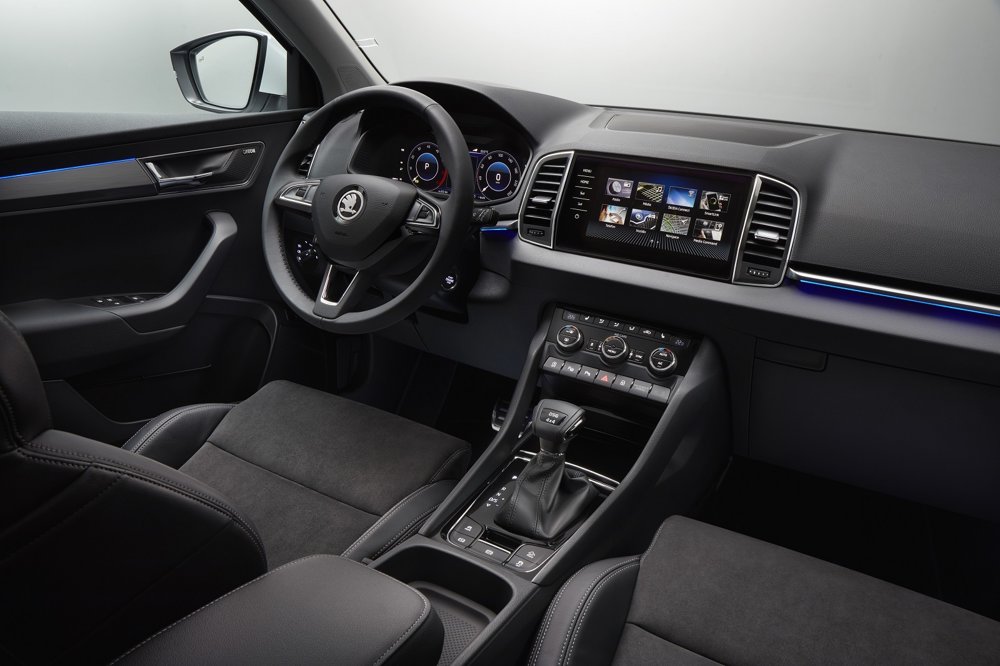 For the first time, Skoda has its “Virtual Cockpit” that in Skoda Karoq can take many forms, from the traditional aspect to the full-screen modes or a definition, so-called, modern and basic mode. This digital instrumentation offers many functions in conjunction with the MIB (Modular Infotainment Matrix) and such modes described. The handbrake is electric, the front and rear seats can be heated and the steering wheel, too. The air conditioning system provides the Air Care function that cleans the air that reaches the interior. As usual, the interior of the Karoq offers plenty of storage space in front and rear. As for tires, the Karoq can fit rims between 16 and 18 inches, six different options.

The entertainment info system is known by other Skoda, with navigation functions (Amundsen), 64 GB internal memory, touch screen touch screen, Bluetooth connection, Wi-Fi hotspot, LTE connection, traffic message and Bluetooth connection. Of course, you can opt for the 9.2-inch screen with 1280 x 640-pixel resolution. The system supports gesture controls (in the Columbus navigation and connectivity system) and the Canton sound system with 10 speakers and 500-watt power is available. The Phone Box is located on the center console and allows for induction charging and wireless vehicle antenna connection.

Skoda Connect offers online services such as real-time navigation with the recommendation of traffic diversions or blocked roads, automatic emergency call (Care Connect), remote access to the vehicle and various services that can be accessed via the computer of the driver or owner of the vehicle. SmartLink + allows the integration of your smartphone with the help of Apple Carplay and Android Auto. There is also an interesting function that is part of the Skoda Care Connect and if the vehicle leaves a predefined area or runs at speeds above 130 km / h, the system informs the owner.

The range for Portugal is still undecided, not even there are prices of the new model. 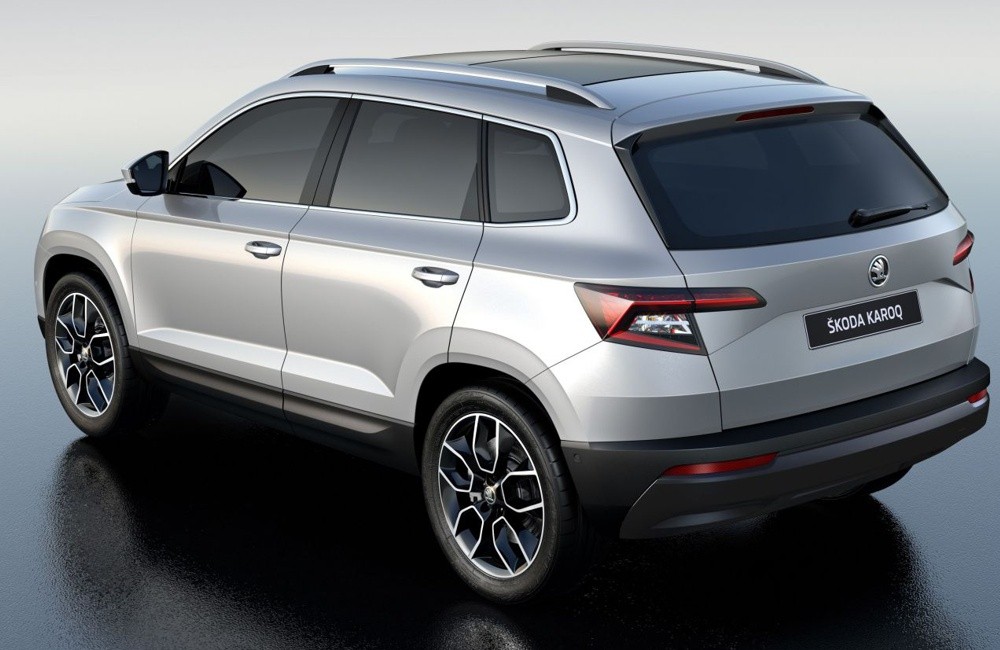 Nothing is missing here! Adaptive Cruise Control, Emergency City Braking with early pedestrian protection, blind spot monitoring, and traffic detection from the rear, alert for unintentional transposition of the lane, aid in conducting in bottling, monitoring of driver fatigue, reconnaissance of traffic signals, passive safety and nine airbags. Automatic control of maxima, active and curve lights and Light Assist (automatic lighting control) is also available. Isofix attachments are provided in the rear seats (the front is optional) and the front headrests are designed to reduce the effect of the rabbit stroke in the event of a rear impact.

In this regard, there are plenty of things that are practical and customary on Skoda models. The holder for tallboys, the umbrella compartment under the front passenger seat, the hat rack attached to the rear door, the ice scraper on the tank lid, the LED flashlight placed in the luggage compartment, the tablet supports on the seat rear and central armrests, airplane tables on the back of the front seats, in fact, a series of things that justify the phrase that serves as the motto of the Czech brand.