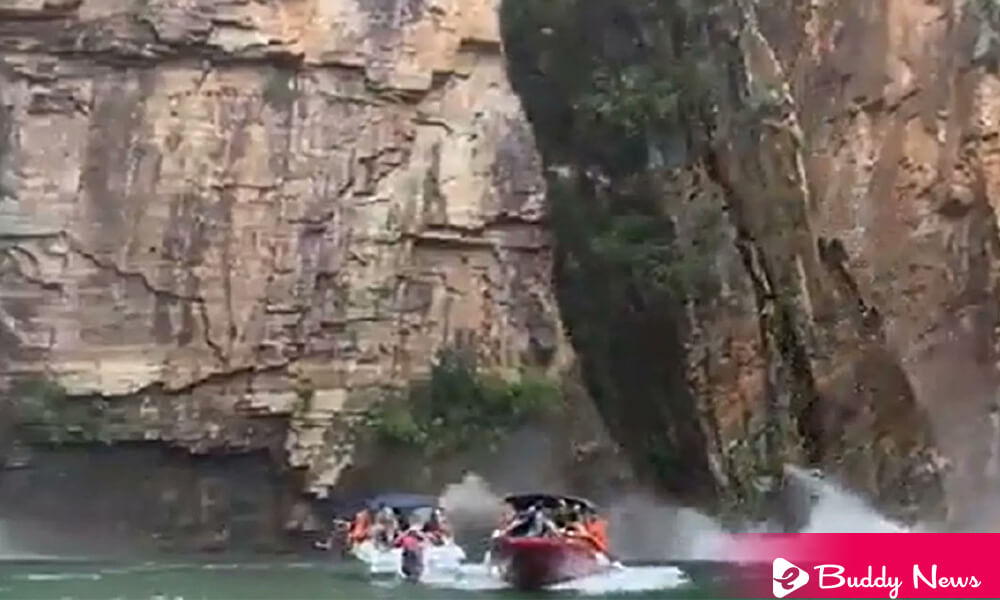 The Brazilian State of Minas Gerais tourist region is located 290 kilometers from its capital Belo Horizonte. At least seven people have died. Another three are missing after collapse of rocky canyon wall on three boats with tourists in Furnas Lake, in Capitolio, at Brazil.

According to the media, the Fire Department confirmed the number of fatalities. The Mobile Emergency Attention Service had indicated that several of its troops are searching for more victims in Lake Furnas.

Another tourist recorded and shows how a rocky wall falls from a height of five meters and impacts the three boats. Sadly two were completely sunk. The detachment of a part of the rocky canyon happened at 11 am in morning.

According to the fire department information, injured more than 30. Nine of them were hospitalized and discharged another 23 after suffering minor injuries.

Pedro Aihara said in an interview that the flow of water threw people. He also added that they could be more serious if they had not brought the life jacket. Some tourists survived by boats in the vicinity.

On the other side, the fire chief expressed his fear since, as he considered, what aggravated the situation was how the rock falls perpendicularly. And he detailed that when it has this type of rupture, it comes how slices, slides through the structure, and falls diagonally or stands up.

It was just seconds before the collapse of canyon wall on the affected boats. After the first video of the detachment of small pieces of rock, new images circulated that show how the other boats were alerted. Also, the rescue teams of the Civil Defense boats transferred the wounded.

For several days The State of Minas Gerais has suffered a severe storm. That caused damage to a dam in the area, flooded roads, and displaced land in the city of Belo Horizonte, where many buildings bordering a watercourse were compromised.

According to firefighters, a waterspout is a reason for the detachment of the cliff.

After the accident, Romeu Zema, Governor of the State of Minas Gerais, tweeted that we suffered a tragedy in our state due to the heavy rains. That caused the detachment of a stone wall in the Furnas lake. He added his solidarity with the families in this difficult moment. The rescue team has already started their work.

The Capitólio town is one of Brazil’s most popular tourist attractions, located about 280 kilometers from Belo Horizonte, Minas Gerais (southeast). And it receives visits all year round for its impressive gorges that travel by boat.