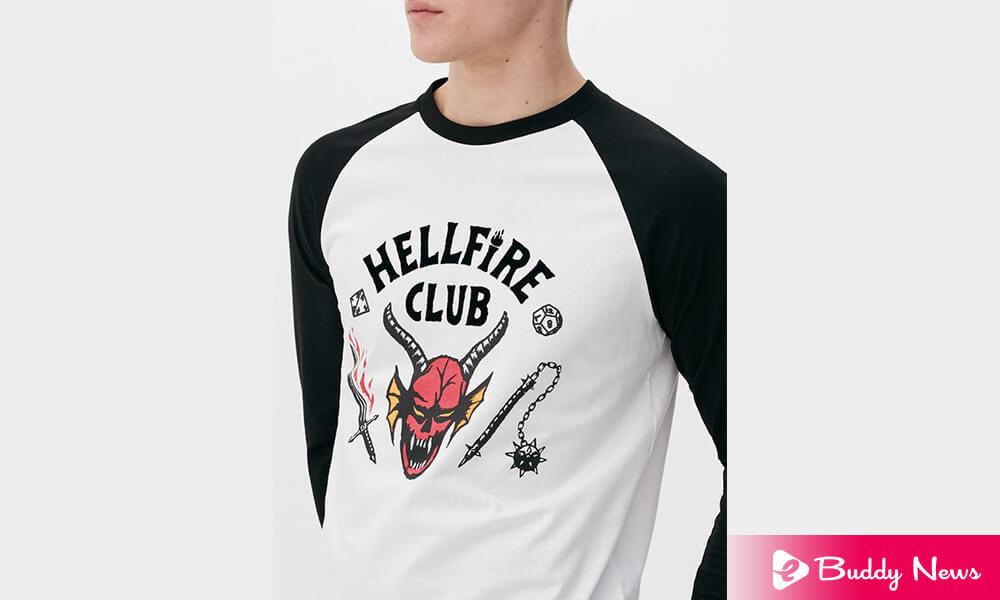 If you are a viewer of Stranger Things 4, Part 1, you have noticed the Hellfire Club baseball t-shirts worn by Hawkins High’s Dungeons and Dragons club. Though the style of t-shirts was older and used in a show in the 1980s, they became a perfect mascot for the D&D group gang. The t-shirt model was named after Lord Raglan had a special way of tailoring his sleeves after being injured in the Waterloo Campaign in 1815. The raglan t-shirt or baseball shirt features a single piece of fabric extending up to the neckline, allowing for a wider range of motion than classic tees, which extend up to the shoulder only. Now all the teenagers watching the series are looking to get these t-shirts. Read on to know how to get the Hellfire Club T-shirt of Stranger Things Season 4 for yourself.

Hellfire Club t-shirt is a surprisingly well-designed tee that is cooler than anything for a teenager to have in his wardrobe. The design includes black sleeves on white, D&D symbols, including game dice, a flaming sword, and the head of a horned devil. The shirt is the pick of teenagers with a year’s version of Dustin’s trucker hat.

All About Hellfire Club

Historically Hellfire club was established in the early 18th century in Ireland. The club was started with a secular idea of Enlightenment thought and parading these blasphemies in the form of public drunkenness. The Hellfire Club of Stranger things is in no way connected to the original club, and the origin of the club name is not known. The Dungeons and Dragons series inspired parents so much that they were convinced that their children were possessed and cursed by demons.

How To Get A Hellfire Club T-shirt of Stranger Things?

There are a couple of t-shit versions available, and there are plenty of options to choose from, and if you want the basic Hellfire t-shirt, you need to visit Amazon.com, which has been selling a variety of sizes.

Some Of The T-Shirts available

This is the actual version of the t-shirt used in episode 1 of season 4 and beyond. The size of the t-shirt is not mentioned, but as it is Our Universe design and listed as men’s and unisex.

The official Hawkins High Hellfire Club t-shirt is available on Amazon. While the white background is not available, the t-shirt is identical to the original one.

In an interview, one of the famous authors, David Waldron, said that since D&D typically featured activities related to magic and witchcraft, youth are developing the inability to distinguish between fantasy and reality. Now it is your turn to pick up the Hellfire t-shirt of your choice and prove that there is no separation between Stranger things and reality.