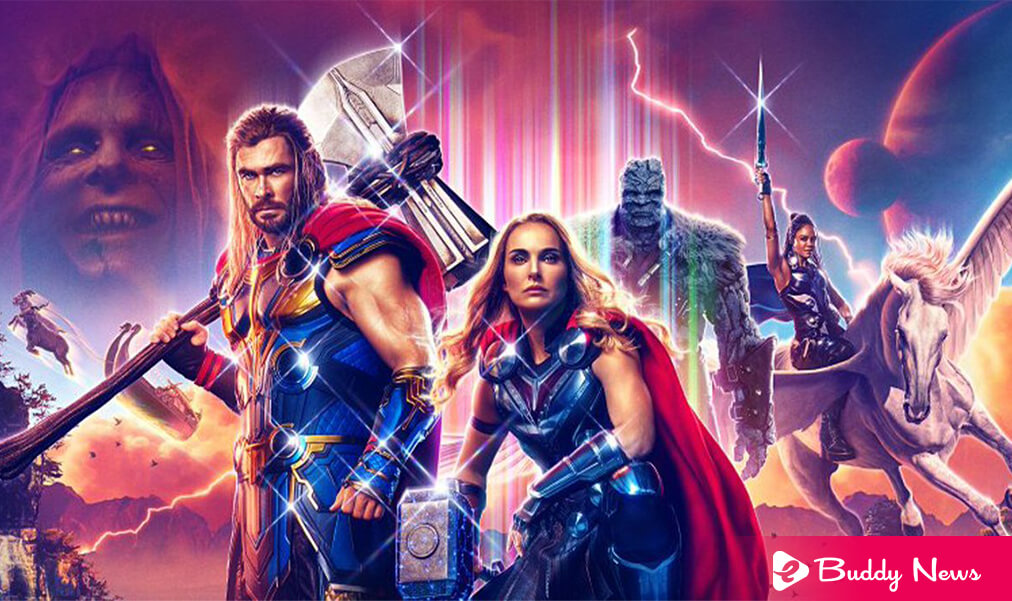 Thor: Love and Thunder hit the movie screens, being the fourth Thor movie in the UCM, and it is the second directed by Taika Waititi, who announced that despite being part of phase 4 of this cinematographic universe, it tells an almost independent story. Is it true? Does he achieve it? And then, is it good or bad? About that and more, we will tell you more about Thor: Love And Thunder in this review with moderate spoilers.

For those who have followed Jason Aaron’s Thor stories in the comics, it’s no surprise that Jane takes up the mantle. It has been one of the most apprehended stages by fans of the character in recent years, and the problem is that at that stage. Foster has terminal cancer, and that sensitive topic collides a bit with the memory of the last Thor that Waititi gave us in Thor Ragnarok, which is full of jokes, an explosion of color, and a festive atmosphere that convinced not all of us.

But Waititi had already taught us in JoJo Rabbit that he knows how to get serious and tell emotional things very well, and here he demonstrates it again. From the outset, we meet Gorr, who gives you all the context and motivation of his character in a five-minute opening sequence. Christian Bale conveys authentic desolation, despair, and desire for revenge from one minute to the next. He demonstrates to Marvel that there is no need to go through the dizzying choro of an entire series to understand a character.

After seeing Gorr, we go to Jane Foster in her chemo session because she has cancer. In this sequence, we see the alternatives she has considered, the stage of her disease, her emotional support, and how far she has progressed in her character. In contrast, we haven’t seen her on-screen.

With these two scenes, the director tells us that this film will be very different from the previous one. It seems that he found his tone and knew how to project it. We can even think that he “learned,” and here, we no longer see meaningless jokes trying to demonstrate his vision.

It is thus that we finally see Thor Odinson. He, thanks to the narration of Korg, his rocky friend, shows us his evolution and recounts his passage through the entire UCM and the number of loved ones he lost who were left without a family, a planet, and nothing? Because we hadn’t dropped the twenty until Korg mentioned it.

And it is thanks to meditation that he learns to cope with his losses or channel his anger. We still see him with the Guardians of the Galaxy with that classic attitude from the first movie in which he feels like he’s cool, but ultimately, a God. He believes that everything revolves around him. It is where the first jokes appear that seem rather cute to me, like all Odinson, who is once again a charming character.

A super important element in this film is the soundtrack because we think that is where Waititi put his spark: It is a tribute to the rock of the eighties, mainly to his favorite band, Guns & Roses, who participates with 4 songs, but also appears as a reference in the chosen name of one of the new characters and the decoration of another character’s room. And we mention it now because precisely, the first battle Thor enters into action has Welcome to the Jungle in the background, and it is Marvelous!

So far, we have told you less than half an hour of Thor Love and Thunder, and my feeling so far was: This is perfect! (heart eyes).

Since we agreed that this would be a review with moderate spoilers of Thor: Love And Thunder, we won’t go into details. It is enough for you to know that the relationship between Jane and the hammer is very similar to that of the comics. However, here they came together for different reasons (very nice, by the way).

Valkyrie is revealed to be a great leader loved and respected by New Asgard. Everyone there has adapted very well to their new life. The way they exploit their strengths seemed great to me.

The problem we have seen very often in films aimed at children is that it seems that the filmmakers are thinking much more about awakening the nostalgia of the parents or uncles who accompany these children, which is not the case here. We were hoping that don’t ask us why because we don’t have the answer, but Thor is most likely, after Spider-Man, the most popular character among children. And we don’t know if anyone involved in the film took it into account, although it is already. It is not a film focused on them and touches on strong themes such as loss and cancer, but it does have several scenes in which he speaks directly to children.

He doesn’t put a cute character so that they like it and ask them to buy it, no, he has dialogues thought about his emotional state, and almost in the final part, he has one of the most powerful scenes for someone who sees it in his childhood, taking from based on the iconic Mjolnir engraved on Mjolnir that we have seen so many times in comics. So she would say that she strikes a fair balance with the interests of her target audience.

When discussing Phase 4 of the Marvel movies, the phrase “auteur film” has been mentioned a lot. We are very surprised that, having such good performances here, we have focused more on talking about its director. Still, it is that it is the driving force. We will love Natalie Portman, but to be honest, many of her performances seem kind of crappy to us, and the chemistry with Chris Hemsworth seemed zero until now. Chris is not the actor that the world expected. However, here everyone is at a great level. They feel connected. Tessa Thompson is installed in this role of a great leader, but she is also the best friend we all want to have. Her support for Thor and her inquisitive comments are the best.

We already said that Bale is magnificent with his emotional changes so believable that they do take you through the emotional abyss in which he is and Korg with the goats. They are the irreverent touch that breaks your tension when you need it most.

So at this point, we can say that Waititi and we were right that this should be an individual story (we including in the backlash because all this phase 4, we’ve been trumpeting that Marvel needs to stop trying to connect everything since, in the end, he does it wrong), Thor: Love and Thunder is a beautiful, exciting and emotional film, we can say apart from review which takes you through the growth journey of a character that we met many years ago and who is clearly at another point today, but at the same time, returned to the essence.

Thor is more Thor than ever, even with a mighty Valkyrie and Mighty Thor by his side. He doesn’t shrink, he doesn’t make them less, and each one has his right moment on the tape. We do not need fan service, although there are many references to the stories of Aaron, who appears in credits as an advisor, and it shows. We also fill in gaps in Thor’s mythology that were left empty and leave us with the promise of more, but from its context, without getting into a fight about wanting to connect with something bigger.

So we, this lover of Jane Foster, The Mighty Thor, who suffered from Thor Ragnarok, who suffered from seeing Wand installed as a villain and branded as crazy (again) in Doctor Strange in the Multiverse of Madness, can say that Thor: Love and Thunder are in our eyes perfect, it is a Marvel film that we have loved the most, and it is this film that made us cry with emotion when we saw it, because Jane said on screen not what we wanted her to say, but what the comics we were taught that it would say, it is as fantastic in the literal sense of the word, as it is hopeful. She also gave us a great villain in the right measure of him. And a Thor Odinson that we want to continue seeing, that we can love and admire, with the promise of more Valkyrie, much, much more.

Although we said in the review there is no excessive fan service in Thor: Love And Thunder, there are outstanding cameos that we mostly already saw in the trailers that do not ruin the movie for you as it had been happening. Thor: Love and Thunder have two relevant post-credits scenes, so stick around until the end.